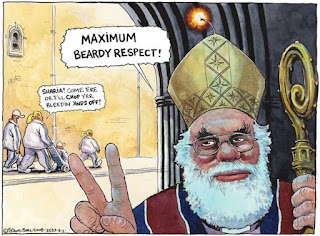 I mentioned in a blog that I wrote last month that I grew up in the Church of England and have a lingering respect for its rituals and its institutions, for the important part that it played in the history of this nation. In the course of this I said;

If I did not feel affection, a lingering sense of respect, I could look upon the pronouncements of Rowan Williams, the muddle-headed Archbishop of Canterbury, with equanimity; but I cannot: he retains the power to madden me with some of his more outrageous statements.

Well he has done it again, this hopeless, pseudo-intellectual, much given to ‘thinking out loud’ as a substitute for thinking at all. Much given, I have to say, to the most vacuous speculations. Now it seems that Henry VIII, the man who has a singular responsibility in the formation of the independent English Church, the man to whom Williams owes his unique position, might just be in Hell. There again he might not for “If Henry VIII is saved (an open question, perhaps) it will be at the prayers of John Haughton.”

Please note the ‘an open question, perhaps’, the kind of slippery evasiveness, get out of trouble quick card, that we have come to expect from Rowan ‘Sharia’ Williams. Anyway, the prayers he will depend on if he is in Hell, an open question, perhaps, are those of Haughton and his fellow Carthusians, executed in 1535 as traitors for refusing to accept the Act of Supremacy, thus recognising the King as head of the English Church. Houghton himself was declared a saint by the Pope in 1970.

I’m not going to say anything about the theology here as Williams is the expert, not I, and he surely knows that no amount of prayer or intervention will be enough to release the denizens of Hell; a closed question, definitely. No matter; Williams went on to say that “In many ages and many places authorities more appalling than Henry VIII have believed that they could abolish God and the cross of God; and they have had to discover that while they may vanquish, they cannot destroy.”

What can I say? Should I agree with Christopher Howse writing in The Telegraph that Williams, in a service aimed at healing the ancient divisions between Catholics and Protestants, should be able to speak freely without being taken amiss? Am I to take it that Henry VIII is to be ranged with modern tyrants like Stalin as one of those who attempted to abolish God?

Poor Henry, a man far more orthodox in his beliefs that Archbishop Williams, a man who believed that while he was a schismatic he was certainly not a heretic and most certainly not an enemy of God. He died, by the lights of his own beliefs, a true Catholic, one who just happened to release the chains binding the national church to the cause of a foreign prince, far more secular at the time than spiritual, a prince whose adherents were at that time and in those circumstances objectively speaking traitors to the English crown. To suggest that he might now be in Hell is an unusual proposition for an Archbishop of Canterbury but not one a fair-minded person would dismiss out of hand, so said Andrew Brown in his Guardian blog.

Well, I dismiss it out of hand, though I confess that I’m not at all fair-minded when it comes to such matters. I could say that Archbishop Williams has even less understanding of Hell than he does of Henry, of the politics and theology of the day. I could say that I do not believe this man fit to be the leading prelate of the English Church; I could say that he himself might very well appear to some as a heretic as well as a schismatic. I will say none of these things because I do not believe in Hell or any kind of afterlife. After all, it’s an open question, perhaps, that if I did that I might end up in the same place as Williams for all eternity, which for me is an open question, perhaps just a little too far.
Posted by Anastasia F-B at 16:19