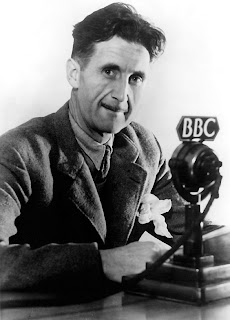 George Orwell has been a huge influence on the way I write, if that does not sound too pompous! I love his prose, his simple, unfussy English style. I have no doubt at all that he is one of the great craftsmen of our language, no doubt that essays like Why I Write and Politics and the English Language will remain classics of their type. He said of himself that he wanted to make political writing into an art, an objective fully attained.

Though I admire some of his novels it really is in his shorter work, in his essays that he is at his most brilliant. In addition to those I have already mentioned there is Such, Such Were the Joys, an account of his days in prep school, Inside the Whale, a critique of the work of Henry Miller, A Hanging and Shooting an Elephant, either based on his experiences as a police officer in Burma or brilliant fabrications, Charles Dickens, the best examination of the author that I have ever read, Rudyard Kipling, The Art of Donald McGill, an examination of the message behind naughty seaside postcards, The Decline of the English Murder and much more besides.

My favourite is Lear, Tolstoy and the Fool, in which he takes up arms against none other than Leo Tolstoy, amongst whose works there is a rather silly demolition of Shakespeare. Orwell, in rebuke, compares Tolstoy himself to the character of King Lear with telling effect;

But is it not also curiously similar to the history of Tolstoy himself?
There is a general resemblance which one can hardly avoid seeing, because
the most impressive event in Tolstoy's life, as in Lear's, was a huge and
gratuitous act of renunciation. In his old age, he renounced his estate,
his title and his copyrights, and made an attempt--a sincere attempt,
though it was not successful--to escape from his privileged position and
live the life of a peasant. But the deeper resemblance lies in the fact
that Tolstoy, like Lear, acted on mistaken motives and failed to get the
results he had hoped for. According to Tolstoy, the aim of every human
being is happiness, and happiness can only be attained by doing the will
of God. But doing the will of God means casting off all earthly pleasures
and ambitions, and living only for others. Ultimately, therefore, Tolstoy
renounced the world under the expectation that this would make him
happier. But if there is one thing certain about his later years, it is
that he was NOT happy. On the contrary he was driven almost to the edge
of madness by the behaviour of the people about him, who persecuted him
precisely BECAUSE of his renunciation. Like Lear, Tolstoy was not humble
and not a good judge of character. He was inclined at moments to revert
to the attitudes of an aristocrat, in spite of his peasant's blouse, and
he even had two children whom he had believed in and who ultimately
turned against him--though, of course, in a less sensational manner than
Regan and Goneril. His exaggerated revulsion from sexuality was also
distinctly similar to Lear's. Tolstoy's remark that marriage is "slavery,
satiety, repulsion" and means putting up with the proximity of "ugliness,
dirtiness, smell, sores", is matched by Lear's well-known outburst:

But to the girdle do the gods inherit,
Beneath is all the fiends;
There's hell, there's darkness, there's the sulphurous pit,
Burning, scalding, stench, consumption, etc., etc.

And though Tolstoy could not foresee it when he wrote his essay on
Shakespeare, even the ending of his life--the sudden unplanned flight
across country, accompanied only by a faithful daughter, the death in a
cottage in a strange village--seems to have in it a sort of phantom
reminiscence of LEAR.

These are all to be found in the four volume Collected Essays, Journalism and Letters, edited by Ian Angus and Sonia Orwell, the author’s second wife. This also contains some of the book reviews that he wrote for Tribune, The New Statesman and other publications of the day.

The letters are interesting, going part of the way towards explaining Orwell’s background, motives and outlook. They are, however, only a small selection. I now have in my hand, as yet unread, the recently published Orwell: A Life in Letters edited by Peter Davison, which I hope will go part of the way towards the autobiography that he never wrote.

I would love to go and stay in Barnhill, the cottage on the Scottish isle of Jura where Orwell stayed intermittently in the last stages of his life, the place where he completed Nineteen Eighty-Four. It is possible to rent it but even now it’s almost impossibly remote, four miles from the nearest public road and still without mains electricity! Still if Orwell could do it I can do it. To breath the air the he breathed is encouragement enough. 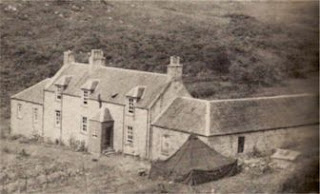 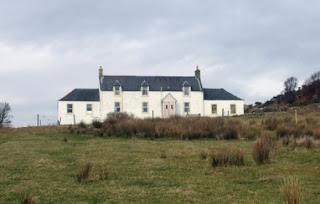