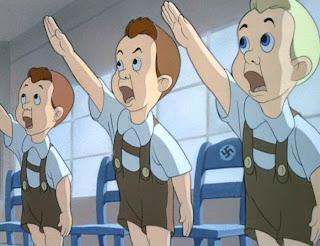 The ethos of the Nazi education system was laid down by Wilhelm Frick, Minister of the Interior, who said in December 1934 that "the political task of the school is the education of youth in the service of the nation and state in the National Socialist spirit". This was supplemented by Bernhard Rust, Minister of Education, who said that the purpose of school textbooks was to achieve "the ideological education of young German people, so as to develop them into fit members of the national community."

The techniques used became less and less subtle with the passage of time, and it is difficult often to distinguish educational material from pure propaganda. Primers often contained stories and poems about Hitler, along the lines of "Herr Hitler is a good man/He lives in Berlin/If it was not quite so far/I'd go and visit him." The German Reader for Elementary Schools, published in 1936, tells the story of a distressed family, rescued from unemployment and want by the Nazis. Another, Happy Beginnings, deals with the Eintopf, the one-pot Sunday meal that German families were encouraged to eat once a month, in order to save money to be devoted to the state.

The idealisation of motherhood is also a regular theme, as are aspects of the bucolic life. Blood and ancestors are important issues, as can be expected, making repeated appearances. In You and Your Ancestors pupils are asked "Do you know what kind of blood runs through your veins?" This is all presented in a colourful and accessible fashion, with poems and stories about hereditary and kinship. Inclusion was important; but not nearly as important as exclusion. The Poisonous Mushroom of 1938 was by far the most invidious example of this particular genre. Indoctrination is even to be found in supposedly neutral subjects, like arithmetic. In one textbook students are given the following problem;

Pupils are then asked questions on the basis of this, along the lines of "What total cost do one cripple and one feeble-minded person create if it takes a lifespan of forty-five years for each?” all intended at one obvious conclusion.
Posted by Anastasia F-B at 16:29