Valens and the Witches 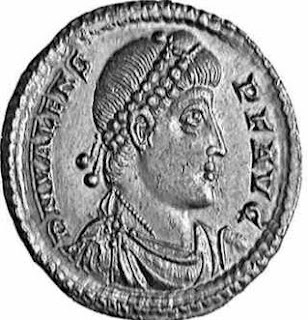 The latest issue of The Fortean Times has drawn my attention to lesser known episodes of the later Roman history, the brief politician witch-hunt in AD 371-2 under the Emperor Valens, heading the eastern part of the Empire. The full story is reported in the pages of Ammianus Marcellinus, an eye-witness to many of the topics he discusses and the best of the late Classical historians, setting himself the task of continuing in the tradition laid almost three centuries before his time by Tacitus.

Two of the early victims of Imperial paranoia were men by the name of Hilarius and Patricious, citizens of Antioch, both accused of using magic in favour of the cause of a potential usurper. After torture Marcellinus says that they made the following statement before a special court convened for the purpose;

My lords, in an unlucky moment, we put together out of laurel twigs in the shape of the Delphic tripod the hapless little table before you. We consecrated it with cryptic spells and a long series of magical rites, and at last made it work. The way in which it did so, when we wished to consult it about hidden matters, was this. It was placed in the middle of a room thoroughly fumigated with spices from Arabia, and was covered with a round dish made from an alloy of various metals. The outer rim of the dish was cunningly engraved with the twenty-four letters of the alphabet separated by accurately measured intervals. A man dressed in linen garments and wearing linen sandals, with a fillet round his head and green twigs from a lucky tree in his hand, officiated as a priest. After uttering a set prayer to invoke the divine power which presides over prophecy, he took his place above the tripod…and set swinging a ring suspended by a fine cotton thread…the ring moved by a series of jumps over the marked spaces, came to a rest on particular letters…

The question, the fatal question, asked of this wigi-like oracle was who would succeed Valens to the throne. No sooner had the ring touched on THEO than one of the company said that this pointed to Theodorus. Thereupon the matter, and the ring, was left hanging.

After all, who else could it be? Theodorus was known to all, a high government official, already denounced by these informers for his imperial ambitions, ambitions aided by magic. He was at once arrested and brought to Constantinople along with his accusers. All three were condemned to death, Marcellinus describing the execution of the principal accused as an ‘Olympic event.’

It’s rather a pity that the magicians did not allow the ring to complete its course. If they had they might have discovered that Valens eventual successor was not Theodorus at all but Theodosius the Great, the last ruler of a unified Roman Empire. Magic has power but only for those with the patience to await its revelations. :-) 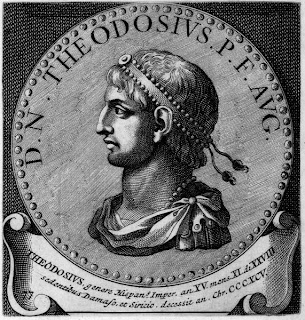