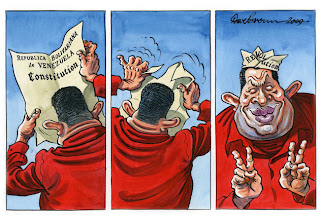 When one assumed that things could not get any worse in Chavez’ Venezuela they do. I suppose I shouldn’t really be surprised because one thing Marxists and socialists of all kinds really are good at is making desolation and calling it progress. The country’s oil wealth is being squandered in Hugo’s vanity projects, which includes propping up the sclerotic Castro regime in Cuba. There is also evidence to suggest that he is offering support to ETA, the Basque terrorist organisation, as well as the FARC guerrilla movement in Columbia.

Meanwhile Venezuela is suffering ever greater problems as this vainglorious man struts across the region like a sawdust Caesar. As the rest of Latin America prospers, Venezuela has suffered a decline in real wages, continual power cuts and a growing shortage of staples, with meat now being added to the growing list. But the most astonishing thing of all that this oil-rich country is running short of hard currency, as Chavez has squandered much of the nation’s reserves to buy arms. Corruption is everywhere, and crime is virtually out of control. Worst of all the economy has been ransacked for purely short-term and partisan benefits. The piggy’s bank is close to empty.

The growing discontent is likely to be reflected in the country’s legislative elections, scheduled in September. And here we have the contradiction at the heart of the whole Chavez project, highlighted in a recent editorial in The Economist: he sees his ‘revolution’s as permanent and irreversible, the usual Marxist teleological rubbish, that history always goes one way, his way. Cuban influence is everywhere, all public buildings now being adorned with Patria, socialismo o muerte – Fatherland, socialism or death- Fidel Castro’s ancient battle-cry.

But unlike the Castro brothers in Cuba, Chavez has derived past legitimacy from the ballot box. He’s been working steadily at undermining freedom from within, suppressing critical voices in the press and undermining the independent judiciary. With the Presidential election scheduled for 2012 it seems unlikely that he will allow himself and his party to be voted out of office; it seems unlikely that he will allow history to go into reverse. So, it’s possible that a Mugabe-style coup may be engineered, opponents intimidated and the ballot rigged. It seems a remote prospect that Venezuela will get rid of this unwholesome thug, or the legacy of history, with any degree of ease.
Posted by Anastasia F-B at 16:13