The Tragedy of John Amery 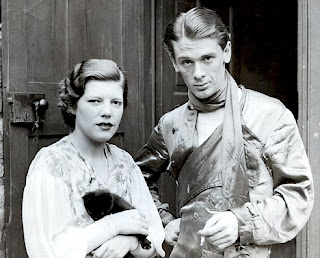 My attention recently to An English Tragedy, a play by Ronald Harwood which depicts the final weeks in the life of John Amery, executed for treason in December 1945. It was broadcast on Radio Four a week last Saturday. Unfortunately I missed it and by the time I found out it was no longer available on iPlayer.

But, from a position of knowing virtually nothing at all about the subject, I’ve done a spot of quick background reading. It’s a tragic story; tragic for him and tragic for his family. It’s a story of self-destruction, the deliberate self-destruction of a man who in some ways recalls the fictional character of Sebastian Flyte in Evelyn Waugh’s Brideshead Revisited. He even had the same life-long attachment to his teddy bear.

John was a worry to his parents from a very early age. Nanny used to tell them of the terrible tantrums that he had, and that he was a very hard child to manage. One of his first teachers described him as "extremely abnormal" with a tendency to live inside himself. His behaviour at Harrow was such that his worried parents referred him to a psychiatrist, who concluded that he had no moral sense of right and wrong. From Harrow he was sent to a boys' school in Switzerland only to return after contracting syphilis, which he claimed to have caught while working as a rent boy.

And so it went on, this litany of troubles and endless rebellion. At the age of twenty he married Una Eveline Wing, an actress who turned out to be a prostitute. He married despite the wishes of his parents, leaving with Una for Paris after they refused their permission. Still his parents indulged him, bailing him out from disastrous business endeavours and criminal exploits. Always short of money, Una was to claim that he continued to work as a homosexual prostitute.

Apart from the general dissolute air he cried with him, he was something of a fantasist. Hating communism, he claimed to have fought with the Spanish Nationalists after the outbreak of the Civil War in 1936, being awarded a medal of honour while serving with Italian volunteer units sent to Franco by Mussolini. In fact this was a lie, though still in wide circulation. Even Harwood believes it to be true. Far from fighting in the war, Amery did not enter Spain until 1939 after the conflict was over.

On his return to France he took up with Jeanine Barde, yet another prostitute. He also fell under the influence of Jacques Doirot, leader of the fascist Parti Populaire Francais. It was now that he adopted a lavish form of anti-Semitism, yet another way of objectifying his hatred of the world. The Wikipedia article describes him as a 'fascist' though I can find no evidence that he ever belonged to any fascist party. Fascism was just another attitude for him, a style and a fashion. There is something more, something about his anti-Semitism, though let me hold on that for a bit.

After the Germans conquered France in 1940, he came to the attention of the occupation authorities, having written some articles critical of British bombing, receiving a personal invitation to come to Berlin from. There, as a guest of the Germany government, he made propaganda broadcasts to Britain beginning in November 1942, on the same network as William Joyce, the so-called Lord Haw Haw. In England Leo Amery was assured by both Churchill and the King that this was no refection on him or his loyalty. Still, he took the final step of going to a lawyer and finally disinheriting his wayward son.

John made nine broadcasts in all, though clearly he soon exhausted his usefulness, as the Germans sent him back to France at the end of the year. There he married for a second time, to Michelle Thomas, his third prostitute lover. This seems to have been the one consistent act in his life, this taste for a particular type of sexual professional!

Back in France he was impressed by the volunteer force that Doriot and others had raised to fight alongside the Germans on the Eastern Front. This gave him the idea that a similar British unit might be recruited from among British prisoners of war. He was allowed to trawl POW camps in France for the purpose of recruiting. Despite the harsh conditions in these places, and the semi-starvation rations, his mission was almost a complete failure. In the end something like fifty men signed up for the so-called Legion of Saint George. 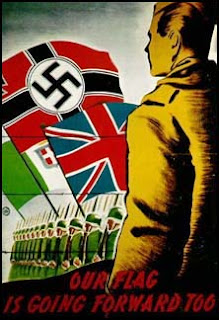 Amery's connection with this unit was ended in October 1943, when it was taken over by the Waffen SS and renamed the British Free Corps. Far from being a 'corps', this force, of purely propaganda value, had less than thirty men at any one time, weaker than a German platoon. Amery returned to Berlin, where he continued to write and broadcast propaganda before travelling to Italy in late 1944 to aid the Salo Republic, Mussolini's rump fascist state in the north of the country. He was captured by Italian partisans, eventually being handed over to the British.

Back in Britain, and with the war now at an end, he was charged with treason. Despite being previously disowned by the family, both Leo and Julian did their best to come to has assistance.

Unlike that of William Joyce, the case against Amery was cast-iron; he was an obvious traitor. Still, he had some powerful connections among the old establishment. There were strong grounds, moreover, for showing that he suffered from a form of mental illness, a defence that had saved the American poet Ezra Pound from similar accusations. But John, in his final act of rebellion, pleaded guilty on 28 November 1945 despite being warned by the judge of the consequences of such a declaration. It was, in effect, an act of suicide, a final way of wounding his family. He was duly hanged at Wandsworth Prison by Albert Pierrepont on December 19, aged thirty-three years old.

In his radio broadcasts from Germany Amery said that he was preventing a "world dominated by Jewry." The tragic thing is, the thing I alluded to above, is that he was quarter Jewish himself, though the family had kept this secret well hidden, something that Harwood discovered in the course of his research for An English Tragedy. Leo Amery's mother had been born in the Jewish quarter of Budapest, though he chose to keep this inconvenient fact hidden because he thought it might impede his rise through the ranks of the Conservative Party, given the casual anti-Semitism of the day. The irony is that while John was broadcasting on the dangers of world Jewry from Berlin he himself would have been eligible for deportation and extermination by the lights of the Wansee Conference.

Was this knowledge part of his self-loathing, part of his lifelong war with his family? It's possible-and Harwood speculates that it was an important factor - but we will never know for certain; indeed, it is uncertain that he new himself. Was his guilty plea an act of expiation or a final act of spite? Again that is something that we will never know.

I have to say there is for me something oddly compelling about John Amery, something compelling in the tragedy of his life, a life that never found an anchor in anything at all other than the worst of causes. He carries shades of Arthur Rimbaud, another professional bad boy. But Rimbaud had true talent. All Amery's potential was squandered into nothing.
Posted by Anastasia F-B at 15:39