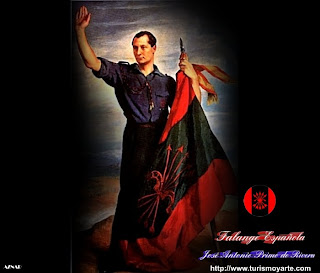 In his essay Inside the Whale George Orwell quotes some lines from Spain 1937, a poem by W. H. Auden. They go like this:

To-morrow for the young, the poets exploding like bombs,
The walks by the lake, the weeks of perfect communion;
To-morrow the bicycle races
Through the suburbs on summer evenings. But to-day the struggle.

To-day the deliberate increase in the chances of death,
The conscious acceptance of guilt in the necessary murder;
To-day the expending of powers
On the flat ephemeral pamphlet and the boring meeting.

We studied this poem at school. I read it before I read Orwell and was struck by exactly the same words, exactly the same sentiments: that there were people like Auden who could talk of the ‘necessary murder’ without having the first idea what this entails, no matter how poetic the language. If the 1930s was a ‘low dishonest decade’, as Auden later suggested in his poem September 1, 1939, he and his kind surly made a major contribution to the lowness and the dishonesty. They looked for the best, blind to the worst.

Their struggle, Auden’s struggle, Spender’s struggle and even Orwell’s struggle would not have been my struggle. I can’t help but sympathise with Jose Antonio Primo de Rivera, the founder of the Spanish Falange and himself a poet, who was the victim of a ‘necessary murder’ in November 1936, when he was shot by a Republican firing squad in Alicante. Why? Is it because I’m a fascist; is it because I sympathise with fascism? On both counts the answer is no. He appeals, rather, to my sense of romance, to my idealism, to my impractical love of all sorts of lost causes, from seventeenth century English Cavaliers to nineteenth century southern Confederates.

Ah, but his side won, the ‘fascists’ won, I can hear the reply. Whoever won it was not the cause of Primo de Rivera, who sought a solution to the Spanish problem that was neither Marxist nor reactionary. If his death was a ‘necessary murder’ it was a necessary murder as much for Francisco Franco as it was for the communist Republicans.

Though honoured as El Ausente (the Absent One) by the Franco regime, he was better as a dead saint than a living politician. The simple fact is that Jose Antonio was a dangerous opponent, a thinker and a radical, in every way different from Franco, a man who had little in the way of intellectual depth and no ideology beyond power. The death of a man he had dismissed as a ‘foppish playboy’ was highly convenient.

An ineffectual and meaningless symbol under the old dictatorship, he is fast being forgotten even as a memory in modern Spain, in many ways rather a pity.