Baphomet and the Templars 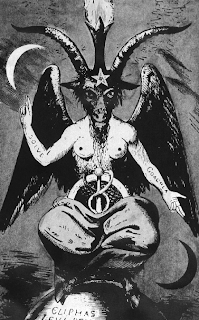 During the Great Purge in Russia in the 1930s NKVD, the Russian secret police, recreated Leon Trotsky as a great Satan at the head of fascist-rightist conspiracy to kill Stalin and his party comrades and thus bring down the Soviet Union. Having conjured up this unlikely demon they then forced those destined to be processed in the public show trails to admit that it was all true. No evidence was required, just beatings and all the subtle tortures, psychological and otherwise, in which they specialised.

There are historical precedents that they might have drawn on for their modern demonology. In the early fourteenth century, on the urging of King Philip IV of France, the Knights Templar, a Crusading order, was suppressed on an accusation of heresy. Philip wanted to get his hands on the order's wealth but simple dissolution was not enough, no, the knights had to stand accused of the most elaborate of crimes. And one of the crimes they stood accused of was worshiping an idol by the name of Baphomet.

There are no independent accounts of the existence of this devil-like creature beyond the records of the Templar interrogations and an earlier twelfth century poem. Twelve of over two hundred knights examined admitted to his existence. It's as well to remember that the confessions, like those obtained in Russia by the NKVD, were the result of systematic torture. Baphomet, in other words, may very well just have been the invention of a particularly imaginative Inquisitor, whose existence was confirmed by those anxious to avoid any further pain. The thing is we just can't be sure. After all, the elaborate schemes woven around the head of Trotsky in Russia did not take away from the fact that he was indeed an enemy of Stalin, constantly critical of contemporary Soviet policy.

But who, or what, is Baphomet, and why was Satan not sufficient, a figure who appeared repeatedly in the trials of alleged witches? The records are confused and contradictory. He was worshipped in the form of a head, either as a skull, a head with a beard, or a head with two or three faces. He was a black cat, an obvious witchcraft familiar. He had a goat's head and horns and a body combining the features of a dog, a donkey and a bull.

It would seem to be an amalgam of Pagan deities and Christian monsters. The name itself would seem to suggest Mahomet, an archaic and corrupt spelling of the name of the Prophet Muhammad. After all the Templars had close dealings through history -and not always hostile - with the Muslim communities of the Middle East. But if it is it is based on the deepest ignorance; for Muslims abhorred idolatry, and there is nothing in Islamic tradition that resembled anything like the forms of worship of which the Templars were accused. Those who take the view that Baphomet represents an attempt to syncretise Islam and Christianity simply ignore the fact that the Templars were never accused of dabbling in Islam in any form. No, they were, like witches, Christian heretics.

So, while it seems unlikely, the possibility remains that the Templars were engaged in the worship of some form of the horned god, either in the form of the Christian devil or in an older pre-Christian guise, and here Pan comes to mind. Personally I see this as a crude device by long-dead interrogators, but even so Baphomet has had a long afterlife.

In 1854 Eliphas Levi, a French occultist, published Dogme et Rituel de la Haute Magie (Dogmas and Rituals of High Magic) in which an image of Baphomet appeared, drawn by himself. It was clearly an imaginative effort, because it bears little resemblance to the Templar testimony. It's an odd kind of amalgam, one whose sex is even indeterminate. Although he makes no such admission himself, Levi may have drawn on the grotesques depicted in the Templar churches of Lanleff in Brittany and Saint Merri in Paris, which show a bearded man with bat wings, female breasts, horns and goat-like hindquarters. Levi explained the significance of the figure, which appears on the front cover of his book, thus;

The goat on the frontispiece carries the sign of the pentagram on the forehead, with one point at the top, a symbol of light, his two hands forming the sign of hermetism, the one pointing up to the white moon of Chesed, the other pointing down to the black one of Geburah. This sign expresses the perfect harmony of mercy with justice. His one arm is female, the other male like the ones of the androgyn of Khunrath, the attributes of which we had to unite with those of our goat because he is one and the same symbol. The flame of intelligence shining between his horns is the magic light of the universal balance, the image of the soul elevated above matter, as the flame, whilst being tied to matter, shines above it. The beast's head expresses the horror of the sinner, whose materially acting, solely responsible part has to bear the punishment exclusively; because the soul is insensitive according to its nature and can only suffer when it materializes. The rod standing instead of genitals symbolizes eternal life, the body covered with scales the water, the semi-circle above it the atmosphere, the feathers following above the volatile. Humanity is represented by the two breasts and the androgyn arms of this sphinx of the occult sciences. 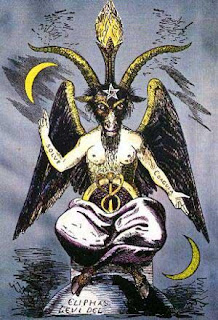 He was to call his creation the Goat of Mendes, another derivative, drawing on Herodotus’ description of the ram-deity worshipped in the Egyptian town of Dejedet. And by this route Baphomet made it into modern occult practices, a central figure in the cosmology of Thelema, devised by Aleister Crowley, a great magus or a great fraud, I leave it to you to choose which. Nosce te Ipsum :-) 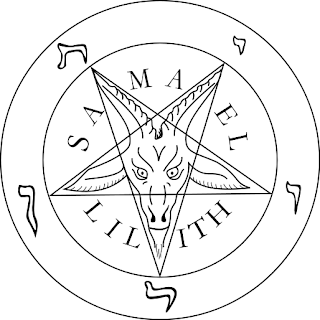 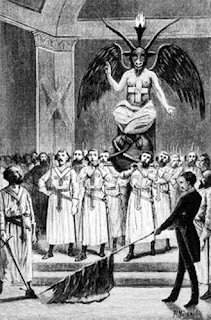