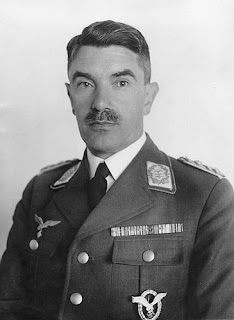 In view of the current, ahem, tensions between Greece and Germany in the benighted euro zone I thought I might just mention the war, with particular reference to the career of Alexander Löhr, commander-in-chief of Army Group E in Greece and Yugoslavia from 1943 until the end of the war.

Löhr was in many ways quite a tragic figure. A soldier of the old school, and Russian Orthodox by birth, he was far from being a committed Nazi. He had, in fact, served in the army of the Habsburg Empire during the First World War, as did many of his senior officers, and thus brought to his command many of the imperial prejudices many older Austrians felt towards the Balkan peoples.

Though tied by the stupid and ultimately self-defeating counter-terrorism guidelines issued to the German Army, he implemented them without a great deal of latitude or imagination. His task in Greece was to eliminate the andartes, and that is what he attempted to do with all thoroughness.

I suppose it did not help matters much that most of his troops, Wehrmacht and SS, had been brutalised by service on the Eastern Front. Indeed, one formation, the 117 Jaeger Division, was specifically told that eine gewisse Brutalität (a certain brutality) was absolutely necessary. The usual measures were adopted against the insurgents, including hostage-taking, wholesale executions and casual atrocities. The consequences of this were exactly the same as elsewhere in Europe; the resistance movement grew steadily in both strength and confidence.

The guerrilla war changed the preconceptions with which the Germans had first arrived in Greece. Philhellenism gave way to notions of the wild 'Balkan fanatic', with the Greeks being seen as little different from the Serbs. As a consequence the Greeks slipped steadily down the racial ladder in the Nazi scheme of things, with the connection between the ancient peoples and 'this land of neo-Greeks' being openly doubted.
Posted by Anastasia F-B at 15:55