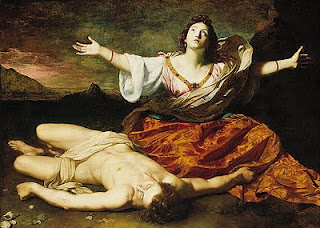 I knew that Lord Byron, the poet, was mad, bad and dangerous to know, but the one thing I did not know was that he was also a champion swimmer! On 3 May 1810 he swam across the Hellespont, the three mile stretch of water that separates Europe from Asia. It was quite an achievement; for although the distance is not great, the currents are strong, with the icy waters of the Black Sea making their way into the Mediterranean.

It was a kind of heroic impulse, undertaken to prove the story of Leander and Hero! According to the Greek myth, Leander swam from Asia to Europe for a nightly liaison with Hero, a priestess of Aphrodite who lived in the tower in the settlement of Sestos. In the dark his way was guided by a lamp lit by his lover. Alas, summer’s lease hath all too short a date. Hero’s lamp was blown out in the storms of winter. Leander lost his way and drowned, while in her grief for the loss of love she threw herself to her death from the tower.

Byron not only emulated the feat of Leander but he also commemorated it in verse;

If, in the month of dark December,
Leander, who was nightly wont
(What maid will not the tale remember?)
To cross thy stream, broad Hellespont!

If, when the wintry tempest roared,
He sped to Hero, nothing loath,
And thus of old thy current poured,
Fair Venus! how I pity both!

For me, degenerate modern wretch,
Though in the genial month of May,
My dripping limbs I faintly stretch,
And think I've done a feat today.

But since he crossed the rapid tide,
According to the doubtful story,
To woo -and -Lord knows what beside,
And swam for Love, as I for Glory;

'Twere hard to say who fared the best:
Sad mortals! thus the gods still plague you!
He lost his labour, I my jest;
For he was drowned, and I've the ague.

The event was repeated on the two hundredth anniversary by a group of enthusiasts, including Charles Gordon, the son of the present Lord Byron.

What history the Hellespont has witnessed, the passing of armies and fleets; the passing of emperors and of time. It was here that the army of the Persian Emperor Xerxes crossed in 480BC, on its way to invade Greece. In the account given by Herodotus the emperor is overcome by a sense of the tragic futility of life;

And seeing all the Hellespont covered over with the ships, and all the shores and the plains of Abydus full of men, then Xerxes pronounced himself a happy man, and after that he fell to weeping. Artabanus his uncle therefore perceiving him [...] having observed that Xerxes wept, asked as follows: "O king, how far different from one another are the things which thou hast done now and a short while before now! for having pronounced thyself a happy man, thou art now shedding tears."

He said: "Yea, for after I had reckoned up, it came into my mind to feel pity at the thought how brief was the whole life of man, seeing that of these multitudes not one will be alive when a hundred years have gone by."

Leander and Xerxes, myth and man, are as one; time absorbs all.
Posted by Anastasia F-B at 16:35