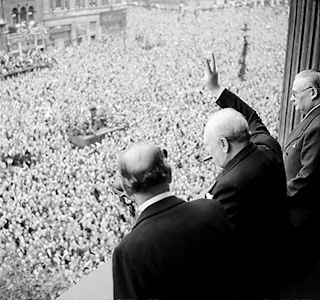 There is a good piece in the latest issue of the BBC History Magazine by Martin Pugh reflecting on some of these points. The problem for Churchill in 1945 was that his personal popularity, buoyant as it was, was simply not enough to compensate for the perceived failings of his party. There was the record of Appeasement that had still to be lived down. A number of sitting Conservative MPs had links with pre-war fascist organisations and one, a certain Captain Ramsay, had actually been interned with Oswald Mosley, the leader of the British Union of Fascists. For once it was the Labour Party that was able to play the patriotic card, not the Tories.

There are other factors to be added to the mix. Churchill had never fought an election as party leader. He simply wasn’t ready for a contest that he probably did not anticipate until the spring of 1946 at the earliest.

Also he clearly had no idea how to tackle his Labour opponents, some of whom had been close associates in the wartime coalition. Rather than looking to the future he returned to the old bruising contests of the past. In possibly the most inept speech he ever gave he suggested that a Labour government would need the support of a Gestapo. The reaction was quite the opposite of that intended: people simply refused to take him, or this kind of scaremongering, seriously. One Labour candidate, Ian Mikardo, had his chairman introduce him at public meetings as Obergruppenfuhrer Mikardo, which always managed to raise a laugh.

Also people had enough of the wartime message of blood, sweat, toil and tears. Although the conflict in the Far East still had some weeks to run, the electorate were already looking to the kind of post-war future promised in the 1942 Beveridge Report. It was the first general election in ten years, moreover, and an unusually high proportion of the electorate were first time voters, including the vast bulk of those in the armed forces, infected, to a significant degree, by a spirit of egalitarianism.

It also has to be said that Tory arguments against ‘socialism’ were less effective than they might have been in the past, since the country effectively had a planned economy since 1940 and people had not yet come to resent rationing quite as much as they were later in the decade The counter argument, of course, is that the country was almost bankrupt; that a period of retrenchment, reinvestment and renewal was necessary, not lavish schemes of public expenditure, which would only serve to compound the problem. But who in the summer of 1945 was ready for that argument? Thus it was that Churchill was given, to use his own words, the order of the boot.
Posted by Anastasia F-B at 16:34