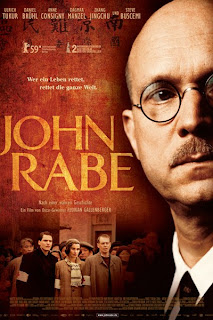 I recently saw City of Life and Death, a Chinese-language movie about the infamous Nanking Massacre of December 1937, an incident in the second Sino-Japanese War. One of the people featured was John Rabe, the German businessman instrumental in setting up the Nanking Safety Zone, a haven for civilians recognised by the Japanese authorities, thereby saving thousands of lives.

I love serendipity, the chance discovery of things I did not know, and I knew next to nothing about this war or the career of John Rabe, rather a pity because in a way he was a much more significant figure in the history of humanitarian causes than Oscar Schindler. Like Schindler, Rabe was a member of the Nazi Party, though he was clearly a man without a Nazi heart, if that makes sense.

Although he features in City of Life and Death he takes on a much more central role in John Rabe, a biopic directed by Florian Gallenberger, starring Ulrich Tukur as Rabe. It was premiered last year at the fifty-ninth Berlin Film Festival, where it won awards for best film, best actor, best production design and best costume design. Tukur also won the best actor prize at the Bavarian Film Awards later that year.

The honours were well-deserved, for his performance is measured, thoughtful and assured. The movie itself, though, has a much more ‘mainstream’ feel, not nearly as powerful, in my estimation, as City of Life and Death, far more emotionally intense in every way.

But even so John Rabe has some sublime moments. There is a scene where the Japanese Air Force is bombing the Siemens factory where Rabe is the manager. The yard is full of Chinese civilians. In a gamble Rabe unfurls a huge Nazi flag and gets everyone to shelter beneath it, hoping the pilots will recognise the symbol of a friendly power. The bombing stops at once. I never, ever thought I would see a swastika as a symbol of salvation!

It’s a reasonably enjoyable, uplifting movie, very much in Hollywood style, about a good Nazi or, rather, a good man, a man with a well developed sense of duty and morality. I saw it online at Watch-Movies.net. There is just one thing. There are no English subtitles, though a good bit of the dialogue among the international community is in English. The rest is in German, including the extracts from Rabe’s Diaries, upon which the movie is based, Mandarin and Japanese. My German is good; my Mandarin and Japanese non-existent! Still, there is very little Chinese dialogue and as the Japanese are almost always shouting it’s reasonably easy to guess what is going on.