Men for their Seasons 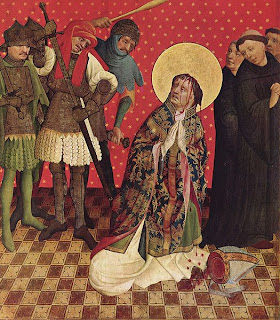 It’s interesting to try to draw some parallels between Thomas Becket, the Archbishop of Canterbury during the reign of Henry II, and Thomas More, the Lord Chancellor for a time under Henry VIII. Both were men of strong principle, both took a stand in defence of the church in their different ways, both are now saints.

There were of course ambitious churchmen in the court of Henry II, enemies of Becket, who might be compared to Richard Rich or Thomas Cromwell, enemies of More, but this is perhaps stretching a point just a shade too far. Now, what I am about to say is based purely on the terms drawn up by the plays Becket by Jean Anouilh and A Man for all Seasons by Robert Bolt, both subsequently made into movies. They are a depiction, in other words, of dramatic rather than historical characters. The real historical Thomas Becket is not quite the saintly, self-denying figure often portrayed.

Anyway, the situations depicted in both plays are really quite different. Becket is about the clash between different forms of institutional power, between the church, on the one hand, and the state on the other. Becket believes that royal power has clear limits, and he has no hesitation in defining what those limits are, risking, and provoking, the anger of the king.

Thomas More, on the other hand, believes that there are areas of personal conscience on which the state has no right to intrude. He does not defy the king; he simply refuses to give positive assent to a particular course of action. Becket might be said to be looking for martyrdom; Thomas More most definitely is not. He is defending the church, or his view of the church, but by silence, not confrontation. Becket is an old medieval prelate, defending power and privilege; More, in contrast, might be thought of as the first victim of state tyranny, the first in a long line. 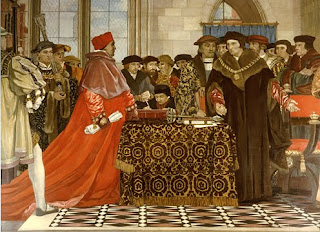