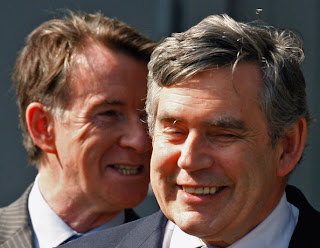 It was the kind of plot that might have appealed to Shakespeare, the last few days of New Labour, though I’m not quite sure if he would have decided on comedy or tragedy. Perhaps he would have opted for a mixture of tragedy, comedy, history, pastoral, pastoral-comical, historical-pastoral, tragical-historical, tragical-comical-historical-pastoral, scene individable, or poem unlimited. :-) I personally would go for tragical farce.

There he was, Gordon Brown, with shades of King Lear, King Duncan and even shades of Othello, the manipulated man, driven mad by misleading advice and poisonous suggestions; made to look a fool, more manipulated than manipulating, by his first ‘resignation’, a tragic clown by his second and more permanent demise. If he can in any way be said to resemble Othello then there can be no doubt who was cast in the role of Iago. It has to be the wretched Peter Mandelson, Lord High Everything Else, both the architect of New Labour and its gravedigger.

In the end Gordon Brown, for all his supposed 'intellect', something I find almost as elusive as his charm, proved to be a startling naïve man, almost childishly so, again like Othello. He placed himself absolutely in the care of Mandelson; he allowed him control over the Labour election campaign, which must count as one of the most dismal ever fought. It was Mandelson and Alistair Campbell, another figure of malevolence, who persuaded Brown to stand aside in an attempt to undermine the Conservative talks with the Liberal Democrats.

Yes, they made him look like a fool, depriving him of the dignity of the noble exit that he should have made earlier in the week. Beyond that there are serious questions here, questions over the conduct of the twice-disgraced Mandelson and the thuggish Campbell, both unelected, questions over their attempt to defy the will of the people, to undermine democracy itself, in a shabby attempt to cling on to power. By their actions they did not raise New Labour, they buried it.

In last week’s Spectator Stephen Pollard argued that it is time to abandon the myth that Mandelson is a political genius (It was Mandy wot lost it). He says that his final abject failure was putting himself at the forefront of the electoral campaign. This, he continued, will surely be “Lord Mandelson’s final disservice to his party.” Well, it turns out that it wasn’t: the Monday manoeuvre was even greater.

The backlash came virtually immediately from within the Labour Party itself, where Mandelson’s ‘suicide pact’ was widely denounced, a disgraceful attempted coup by him and Campbell, dubbed the ‘unelected and the unelectable.’ Opposition came from such senior figures as Jack Straw, Andy Burnham, Bob Ainsworth and Sadiq Kahn. I hope these people and others in the party remember that David Miliband, that shabby and cowardly figure, the Baldrick of Labour politics, is close to both Rumba and Campbell. One thing is certain: this is Mandeson’s third and final exit. Let the curtain drop.

To-morrow, and to-morrow, and to-morrow,
Creeps in this petty pace from day to day,
To the last syllable of recorded time;
And all our yesterdays have lighted fools
The way to dusty death. Out, out, brief candle!
Life's but a walking shadow, a poor player,
That struts and frets his hour upon the stage,
And then is heard no more. It is a tale
Told by an idiot, full of sound and fury,
Signifying nothing
Posted by Anastasia F-B at 16:46