Mosley and the New Party 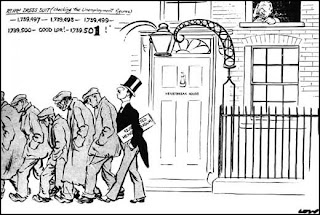 Oswald Mosley, the eventual leader of the British Union of Fascists, was, rather like Winston Churchill, notable for his tendency to switch parties. Originally a Tory, he joined the Labour Party, rising to high public office in the wake of the party’s electoral success in the election of 1929. Always something of a political maverick, had no real roots in the British Labour movement; and in traditional Labour politics roots was everything. His obvious ambition, his personal vanity, and his tendency to strain at the constraints of party discipline, were also factors working against him. His intellectual brilliance and his personal charisma clearly impressed some, though in the end this was not enough.

The Mosley Memorandum was a bold scheme, with Keynesian overtones, for dealing with the problem of mass unemployment, but was in advance of orthodox thinking; in advance of what the senior figures in the government of Ramsay MacDonald were prepared to contemplate. When the cabinet failed to accept his arguments he resigned from ministerial office, comforting himself, one suspects, with the same false hopes of Lord Randolph Churchill - that his stature, the force of his argument would carry his parliamentary colleagues along the road of support. It did not.

In forcing a vote critical of government policy on unemployment he lost by 29 to 210. His last hope was to persuade the annual Party conference, held at Llandudno in October 1930. Although the constituency parties voted heavily in his favour the executive had the support of the trade union block vote. He was now an isolated figure in the movement, a prophet without honour.

It might be said that from this point onwards Mosley was carried forward by a mixture of conceit and frustrated ambition. He was already noted in the Party for a belief that 'dictatorial methods' were needed to deal with the depth of the economic crisis, causing some to nickname him the 'English Hitler.' Mosley was hopeful that Aneurin Bevan, a prominent Labour left-winger, would join his proposed New Party, but he shied away, saying that it would 'end as a Fascist party.' Mosley’s whole base of support soon evaporated. The New Party formed on a ripple, not a tide. Fascism lay beyond.
Posted by Anastasia F-B at 16:33