The Garden of Epicurus 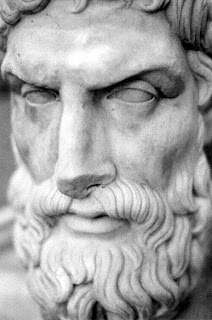 There is a pragmatic quality to the system of Epicurus. In the Principal Doctrines, for example, he defines justice as a system of mutual advantage, something that can be changed in accordance with circumstances. Human conduct, moreover, should be motivated, he argued, not by fear of omnipotent deities, but by correct reasoning over which actions to pursue and which to avoid.

Medieval thinkers, I feel sure it comes as no surprise, had a generally poor opinion of the Epicurus. John of Salisbury condemned him as a materialist and a sensualist, while Dante in the Inferno consigned him to the sixth circle of hell for denying the immortality of the soul. His reputation began to revive with the Renaissance. Lorenzo Valla was among the first to extol the virtues of Epicureanism, though with an understanding no greater than that of John of Salisbury. Erasmus, focusing on Epicurus' life of quiet simplicity, saw him as a precursor of the Christian ascetics. At the other extreme Michel de Montaigne and Giordano Bruno championed his doctrine of pleasure, together with his revolt against religions that deny the significance of earthly life in favour of some ethereal paradise.

But the real revival does not come until the seventeenth century, in the work of Pierre Gassendi, who published his Eight Books on the Life and Manners of Epicurus in 1647. This enjoyed considerable success in England, influencing the likes of Thomas Hobbes, John Locke, Walter Charleton, author of Epicurus' Morals, and Sir William Temple, who wrote Upon the Garden of Epicurus, or Of Gardening.

He is not my favourite moralist among the ancients; that honour belongs to the divine Marcus Aurelius. But I do admire the sharpness of his thinking. He is eminently quotable. Here are my favourites:

1. Death does not concern us, because as long as we exist, death is not here. And when it does come, we no longer exist.

2. I never desired to please the rabble. What pleased them, I did not learn; and what I knew was far removed from their understanding.

4. The greater the difficulty, the more the glory in surmounting it.

6. The time when most of you should withdraw into yourself is when you are forced to be in a crowd.
Posted by Anastasia F-B at 16:12