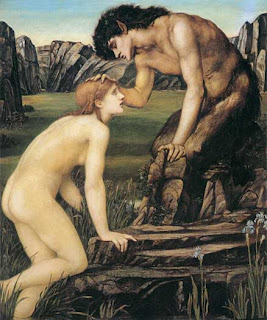 This poem was written by my friend Adam Garrie. What can I say other than I'm absolutely delighted. :-)


I heard a voice beside a stream,
An echo from a windswept dream,
Where fire and water filled the cup,
The daughter of Pan would soon drink up.


When mesmerised by memory and the refrain,
One cannot do two things the same,
If not because the weight of gold,
Is but a price yet un-foretold.


Everywhere the hand is lain,
Weaves a spell of love and pain,
Sorrow for fortune, joy for depletion,
Often the ends justify their own reason.

A heroine cross the paths of time,
The hallowed halls of men gone blind,
To the virtue in the fore,
When they've resigned to learn no more.


Oh now child, what means thee,
What price is paid for gallantry,
What noble flame could e'er conspire,
To make her half fulfilment and half desire.


The shepherdess whom outran the flock,
Pandora's treasure can n'er again be locked,
Abandon hope in all illusion,
When on this soil one imparts intrusion.


If the things that fill man's dreams,
Are more real than life, it seems,
The deceiver has become deceived,
And she shan't dare to feign relieved.


Not of this world of minds so empty,
A bridge of sighs o'er trolls aplenty,
The Promethean who cusps the pale of danger,
Great things aren't done from inside a manger.


Sophia runs no normal end,
When rivers of madness twist and bend,
To but be cursed is a kind of blessing.
For in this state the eyes are most confessing.


The noble claw is yet outstretched,
The Restored Stuart out of breath,
The Tory more royal than the King,
Could paint my woe in the hue of spring.


Only from darkness may leap joy,
Only in sorrow might dreams deploy,
Only in anger, lust or company polite,
May one do battle as the knight.


But oh what imps run wild today,
Perpetual children in man's fray,
Not to conquer not to be owned,
As a web of another spell is sown.


Not to battle, just to triumph,
Heaven is the shadow of regretted violence,
Hell is but a favoured hiding place,
And earth is where we show our face.


She is hallowed--she is flesh,
She is mercy too dear to be expressed,
She is the chariot in a garden blue,
Whose flower blossom perpetually lies in bloom.


Said a man: "Oh tell me traveller without name,
Has your destiny in one place remained,
Have you for wisdom, pity exchanged,
And if so, for what reason does one lack shame"?.


The boy-traveller just stood and soft replied,
There's no longer a need to live nor die,
And without knowing just quite why,
He said, "The world is seen in Anastasia's eyes".
Posted by Anastasia F-B at 16:20