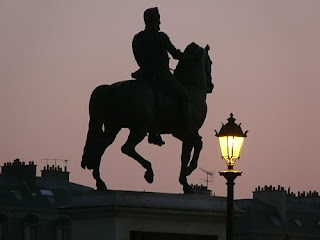 The French Republic has recently celebrated a new hero. The odd thing is he is a King and he’s been dead for exactly four hundred years!

We have not long passed to four hundredth anniversary of the death of Henri IV, the first of France’s Bourbon kings, who was assassinated on May 17 1610 by religious fanatic by the name of Francois Ravaillac.

The French have every reason to celebrate his rule, which contrast so sharply with the miserable performance of the present-day monarch, Nicholas Sarkozy. Not only did Henri end the Wars of Religion, which had torn the country apart for a good bit of the preceding century but he managed to reduce the country’s deficit by a third, while increasing state revenues by a half without resorting to large hikes in taxation. He is the sort of leader that we need now in England!

Henri for a King had a remarkable common touch and his death was widely mourned by the nation. He famously promised all French workers the “means to have a chicken in the pot every Sunday”, contrasting sharply with the ruinous tax and spend policies of his successors, which by 1789 was to impoverish the peasants and bankrupt the state.

He was also something of a pragmatist and a cynic. Formerly as King of Navarre he had been a leading Huguenot, a French Calvinist, who converted to Catholicism to save his life in the wake of the 1572 Saint Bartholomew’s Day Massacre of his co-religionists. Afterwards he reverted back to Protestantism, which made him in the eyes of Catholics a ‘relapsed heretic’ and therefore unworthy to be King of France.

His succession was opposed by the powerful Catholic League, particularly strong in Paris and the north. But with the assassination in 1589 of Henri III, the last of the Valois kings, Henri Bourbon had by far the strongest claim. Saying that “Paris is well worth a mass” he converted back to Catholicism, easing his way to the throne.

Though his legitimacy was accepted by most in the Catholic party that still left a semi-lunatic fringe; it left the likes of Ravaillac, not just a fanatic but almost certainly clinically mad, so mad that he was even expelled after three weeks by the Cistercian order of the Feuillants on account of his ‘visions.’ Believing that Henri was about to make war on the Pope, whom he heretically believed to be God, Ravaillac determined to kill the king, stealing a knife from an inn for the purpose and stabbing him while he was travelling through the busy Paris streets in his couch.

But now Henri is back, a symbol of national nostalgia, the embodiment of the legend of the good king whose image is to be seen across the country on billboards, on magazine covers and him shop windows. Vive Henri Quatre!