The Spirit of Hegel 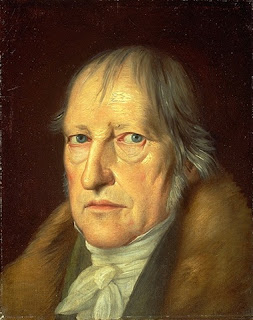 The Master-slave dialectic is one of the central arguments of Hegel’s The Phenomenology of Spirit. A dense and difficult thesis, it aids understanding if one substitutes ‘individuals’ for the author’s somewhat perplexing usage of 'self-consciousnesses'. Looking at it from this perspective, then, the idea to hold on to is that each individual requires another to establish full self-awareness. What is required from the other is acknowledgement or recognition. The integrity of my self-consciousness (not, I stress, to be mistaken with 'embarrassment' in strict English usage) is threatened by the existence of another who refuses to acknowledge me as a person.

It is this mutual relationship that is complicated in the relationship between master and slave, a relationship of domination and dependence; it is the division, in other words, between the ruler and the ruled. In this relationship the master would seem to have everything: he has both the subservience of the slave and the fruits of his labour. But what of his need for acknowledgement? The master acknowledges the slave, true, but it is the acknowledgement only of a 'thing', not an independent consciousness. In this unequal relationship the master has failed to achieve the acknowledgement he requires. The slave, too, lacks adequate acknowledgment; but he transforms and shapes the external world by his labour. He achieves permanence in labour, not the merely temporary gratification of the master. In this process he becomes aware of his own consciousness; for he has created before him something meaningful and objective. In this he discovers the nature of his own mind.

His argument starts to become just a shade, just a shade, less abstruse as the Phenomenology starts to deal with real historical situations. There is a discussion of Stoicism, a philosophy that could embrace the master in the shape of Marcus Aurelius, on the one hand, and the slave in the shape of Epictetus, on the other. It is in Stoicism that the slave, who has achieved self-awareness in work, can achieve a more complete type of freedom in withdrawal from the immediate conditions of existence into deeper forms of consciousness. In other words, the Stoic in chains is free because the chains no longer matter to him.

The problem here is that thought, cut off from the real world, is ultimately barren of any real substance; so the spirit moves on, through successive stages of existence and experience. If you intend to read the Phenomenology, or are reading it, there are huge passages here that you could quite happily skip, though there is an interesting discussion of forms of society based on laissez-faire economics, where Hegel's critique comes very close to that of Karl Marx. Just remember that the central idea to keep hold of is that the mind or the spirit, if you prefer, is moving towards ever higher forms of consciousness, with freedom as the ultimate goal. The French Revolution, then, becomes the climax of history, the stage where the mind achieves a state of absolute freedom.

So, there you have it: history is simply the arena in which the spirit achieves full consciousness of itself. The whole thing is highly abstract, almost impossibly so. There were those like Marx who were to turn Hegel's wordy speculations in a much more historically concrete direction, in concepts like alienation and class-struggle.

What do I think? What can I say other than to offer you the following observations of a far greater thinker that dear old Georg;

If I were to say that the so-called philosophy of this fellow Hegel is a colossal piece of mystification which will yet provide posterity with an inexhaustible theme for laughter at our times, that it is a pseudo-philosophy paralyzing all mental powers, stifling all real thinking, and, by the most outrageous misuse of language, putting in its place the hollowest, most senseless, thoughtless, and, as is confirmed by its success, most stupefying verbiage, I should be quite right.

Further, if I were to say that this summus philosophus [...] scribbled nonsense quite unlike any mortal before him, so that whoever could read his most eulogized work, the so-called Phenomenology of the Mind, without feeling as if he were in a madhouse, would qualify as an inmate for Bedlam, I should be no less right. On the Basis of Morality

Stay clear of the madhouse!
Posted by Anastasia F-B at 16:55