Blood of the Lamb 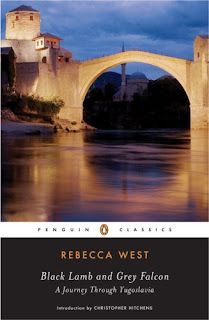 A few years ago I read The Return of the Soldier, the first novel of Rebecca West, the pen name of Cicely Isabel Fairfield. I quite liked it, but not nearly enough to pursue the author any further. But earlier this year, on the recommendation of another blogger, I bought Black Lamb and Grey Falcon, one of her later books.

At almost 1200 pages it’s quite a tome, too heavy and too big even for my shoulder bag, which contains all sorts of fripperies! But I’ve been reading it in bite-sized chunks since March, interspersed with other things. I finished it in Rome at the weekend and I already feel a sense of loss; for it’s one of the most remarkable books I have ever come across. There is no exaggeration or hyperbole here.

I’m not sure exactly how to describe Black Lamb and Grey Falcon, first published in England in 1941. On the surface it’s an account of the author’s visits to the old state of Yugoslavia - now no more than a historical memory - in the interwar period. To that extent it’s a travelogue, but, oh, how shallow and inadequate that word seems, conjuring up the tedium of train spotting and stamp collecting; places gathered on an itinerary, images frozen in an album.

There are indeed beautiful and lengthy descriptions of the various places she visited, from Croatia in the north to Macedonia and Montenegro in the south, places to follow in her footsteps. But Black Lamb and Grey Falcon is so much more than a travel journal or a Lonely Planet guide. It’s part history, part criticism, part philosophy, part theology, part personal introspection, part political warning and, towards the end, even part novel. Above all, it’s a kind of love story, the story of the writer’s love for the people and the civilization of Serbia. She made me see Serbia partly through her eyes and partly through the eyes a man she identifies as Constantine the Poet, her official government guide through the country. I will have more to say about ‘Constantine’, a figure I fell in love with, a bit later.

The tragedy of Yugoslavia, and, yes, and the story is indeed a tragedy, is that it was a country shaped around some of the great contradictions and fault lines of history – the Western and the Eastern Roman Empires, the Catholic and the Orthodox, the Christian and the Muslim. It was this background, and these influences, that made the Southern Slav State all but an impossible dream.

Driven by internal hatreds, the people were also the victims of empire: of the Turkish Empire, against which the Serbs fought for centuries in pursuit of the right to exist, and of the Austrian Empire, which in its later Austro-Hungarian form was to be a particularly malevolent influence. Beyond that West sees the Slavs as a victim of a ‘Third Empire’, one yet to emerge. This, as she puts it, is Gerda’s empire. Who or what is Gerda, you ask? Gerda is Constantine’s wife, and of her I will also have more to say.

The wonder of this great, meandering book is that it takes one to the heart of a civilization or a people – I really can’t say ‘country’- through its past, through the traces of its past, through its art, particularly in the various religious establishments West visits, places that seem to give one the intensity of the Orthodox experience, mystical, ethereal and yet immediate in the lives of the people. There are long historical passages where she touches on the greatness of the medieval Serbian Empire, the empire of Stephen Dushan, the last best hope of saving Byzantine civilization from the steady encroachment of the Ottoman Turks. But Dushan died and within a generation Serbia crashed to ruin. Serbia met destiny and destruction on the battlefield of Kosovo.

This is another remarkable thing about Black Lamb and Grey Falcon: it shows, as West puts it, the past side by side with the present it created. Here her argument gets quite subtle. She has no time at all for Christian concepts of atonement or sacrifice, in what she calls the blood ritual of the black stone. The black stone in question is a feature in a field she comes across, a place where the peasants come to offer up lambs in sacrifice.

It was this fatal obsession with sacrifice, this obsession with a greater kingdom, an eternal kingdom, which took Tsar Lazar into battle with the Turks on Saint Vitus Day, 28 June 1389, a recurring black day in Slav history. Here she records the old Serbian poem of Tsar Lazar and the Grey Falcon, translated for her by Constantine;

There flies a grey bird, a falcon,
From Jerusalem the holy,
And in his beak he bears a swallow.
That is no falcon, no grey bird,
But it is the Saint Elijah.
He carries no swallow,
But a book from the Mother of God.
He comes to the Tsar at Kossovo,
He lays the book on the Tsar's knees.
This book without like told the Tsar:

"Tsar Lazar, of honourable stock,
Of what kind will you have your kingdom?
Do you want a heavenly kingdom ?
Do you want an earthly kingdom ?
If you want an earthly kingdom,
Saddle your horses, tighten your horses' girths,
Gird on your swords,
Then put an end to the Turkish attacks,
And drive out every Turkish soldier.
But if you want a heavenly kingdom
Build you a church on Kossovo;
Build it not with a floor of marble
But lay down silk and scarlet on the ground,
Give the Eucharist and battle orders to your soldiers,
For all your soldiers shall be destroyed,
And you, prince, you shall be destroyed with them."

When the Tsar read the words,
The Tsar pondered, and he pondered thus:

The Tsar chose a heavenly kingdom,
And not an earthly kingdom,
He built a church on Kossovo.
He built it not with floor of marble
But laid down silk and scarlet on the ground.
There he summoned the Serbian Patriarch
And twelve great bishops.
Then he gave his soldiers the Eucharist and their battle orders.
In the same hour as the Prince gave orders to his soldiers
The Turks attacked Kossovo.

Then the Turks overwhelmed Lazar,
And the Tsar Lazar was destroyed,
And his army was destroyed with him,
Of seven and seventy thousand soldiers.

All was holy, all was honourable
And the goodness of God was fulfilled.

But it was not good, so far as West was concerned; for the people were given over to centuries of servitude. Writing from the perspective of the late 1930s it was evident to her that “the whole world was a vast Kosovo”; that Czechoslovakia was the ‘black lamb’ and that Neville Chamberlain, then British prime ministers, was the high priest of the cult of sacrifice. Resistance, not sacrifice, was the essential thing, the noble thing.

I really must stop here for fear of spending as many words in praising this superb book as it took to write it! So let me just finish, as promised, by saying something about Constantine and Gerda.

Constantine, as I have said, is described as a poet and an official, a one-time student of Henri Bergson, the great French philosopher. And taking a cue from Bergson’s philosophy he is for me a living representation of the élan vital. He is full of wit and wisdom, full of simple energy, full of love for the idea of Yugoslavia. Throughout the book he is a dominant influence, a giant. He is also of Jewish origin, a point of some relevance.

When the party arrives in Belgrade we meet Gerda, his wife. Quite simply Gerda is a monster. She is German, not just German but an obvious Nazi. She travels south with West, West’s husband - who accompanies her throughout her trip - and Constantine to Macedonia but hates everything she sees: she despises the Slavs and Slav culture. Her mere presence diminishes Constantine, from giant to dwarf. It was with her that my sense of disbelief kicked in. Here the book was entering into the territory of the novel. I quickly realised that there was no Gerda; that she was an idea, a metaphor for the things to come, a metaphor for the Third Empire that was to visit Yugoslavia in 1941, a metaphor for a final sacrifice to the Black Stone.

No sooner had I finished Black Lamb and Grey Falcon than I began to think about Constantine, about the fate of Constantine. Perhaps worry is a better word. West makes no mention of him in her epilogue. What happened to him, I wondered, after the Nazis took control, after Gerda’s Empire was set in place? The rump state of Serbia was one of the first places to be declared Judenrein – free of Jews. Did this brave and wonderful man, one who survived the death march of the Serbian army in 1915, end up in Auschwitz like so many others? Did he exist at all, or was he just another symbol, another metaphor? I’m delighted to say, after some quick internet research, that he did exist and that he did survive. His name was not Constantine at all. He was Stanislaw Vinaver, an important figure in Serbian literature and culture. He joined the Yugoslav army in 1941 and was held as a prisoner-of-war in a German camp. During this time West sent him food packages through the Red Cross. He died in 1955.

Black Lamb and Grey Falcon finishes with bombs falling on London. The author reflects Often, when I have thought of invasion, or a bomb has dropped nearby, I have prayed, ‘Let me behave like a Serb.’ Amen. How extraordinary these people are and how extraordinary it is that we have understood them so little. How extraordinary this book is, a true masterpiece. 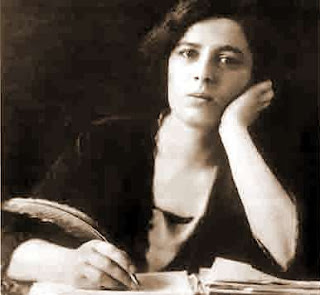 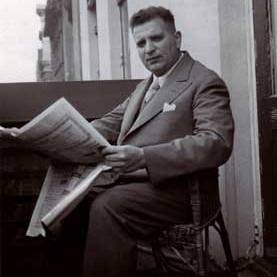