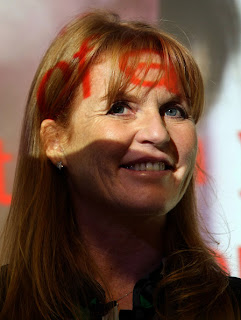 I try to avoid passing comment on the activities of the royal family. But the story about Sarah Fergusson, Duchess of York, spread across the British press today, really does demand some kind of response. After I read the report in The Daily Telegraph at lunchtime, detailing her attempts to sell access to Prince Andrew, her former husband, in a shady business deal, I felt the overwhelming urge to Tweet. “The Duchess of York is a high class pimp”, I wrote “and Prince Andrew, her ex-husband, the most expensive rent boy in history.”

My tweet was ‘funny serious’, if I can put it like that. But, my, oh, my, how grotesque this appalling woman is, how cheap for all her expense. Lynne Featherstone, a Home Office Minister, was quite right to break with the convention that no criticism should be offered of the royal family, saying that “It’s really quite depressing. Lord knows what the Queen thinks waking up this morning.”

I think I can guess. I saw the television coverage of Fergie’s interview with the undercover reporter, who caught her in a perfect sting, a sting she had not the wit or the intelligence to penetrate. What struck me most was the cheap vulgarity of the whole thing, this fifty-year-old woman, living well beyond her means, trying to rent access to her former partner because she has “not got a pot to piss in.” She said to the reporter “Look after me and I’ll look after you…you’ll get it back tenfold. I can open any door you want.” In the half-million dollar deal she was hoping to swing she might as well have said “Make me an offer I can’t refuse.”

I just wonder now if there were others, people who did buy access to Andrew in his capacity as business ambassador. As far as Fat Fergie is concerned it just goes to show that decent schooling and a privileged upbringing does not necessarily bring class and style. With her it was just the contrary. Why was she ever allowed to attach herself to the royal family in the first place; why was she allowed to cling on to them long after her divorce, milking them, and her connections, in an altogether crass manner? What shame she brought on the Firm, this wretched parvenu. She is the princess who was always a pig.
Posted by Anastasia F-B at 16:05