The Good Man of Nanking; an Eastern Schindler 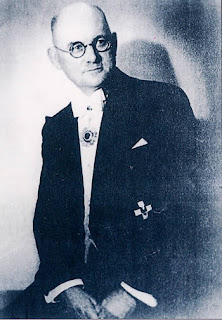 Watching City of Life and Death has drawn to my attention the life and career of John Rabe, a German businessman and member of the Nazi Party, who did his best to protect Chinese civilians during the Nanking Massacre. He was instrumental in setting up the Nanking Safety Zone helped to save thousands from the indiscriminate slaughter by the Japanese Army, in what must count as one of the most loathsome acts in that country’s history. Rabe’s conduct enjoys the same moral and practical significance as that of Oscar Schindler in Europe.

Rabe, who had worked in China for many years, explained his reasons for setting up the Safety Zone in simple ethical terms;

…there is a question of morality here…I cannot bring myself for now to betray the trust these people have put in me, and it is touching to see how they believe in me.

While the occupation underway, Rabe effectively used his status as a citizen of a power friendly to Japan, as well as his membership of the Nazi Party, to delay the killings sufficiently to allow thousands of refugees to escape to the Safety Zone, established in embassy district and the city’s university. The Japanese had previously agreed not to attack these areas on the understanding that they were free of Chinese troops. By his actions he is estimated to have saved the lives of up to 250,000 civilians, which makes his achievement if anything more startling than that of Schindler.

On his return to Germany in February 1938 he took with him a large number of documents detailing the things he had witnessed. He also wrote to Hitler asking him to exert his influence to stop the Japanese indulging in any future actions of this kind. His letter was never delivered. Instead he was arrested and interrogated by the Gestapo, only released after the intervention of Siemens, the company he worked for. Although he was allowed to keep the evidence he had accumulated he was forbidden from lecturing or writing on the subject.

Rabe died in January 1950. Prior to this the poverty and hunger of his family among the chaos of post-war Germany was ameliorated by the Chinese government, which sent him monthly food and money parcels in thanks for his actions. In 1997, sixty years after the Massacre, his tombstone was moved from Berlin to Nanking, where it was installed in a place of honour at the massacre memorial site.
Posted by Anastasia F-B at 16:05