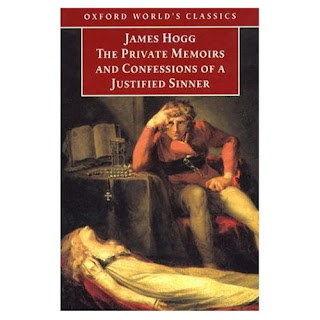 So, what is the best Gothic novel ever written? For me there can only be one candidate: The Private Memoirs and Confessions of a Justified Sinner by James Hogg, a nineteenth century Scottish poet and author. Hogg wrote it with a straight-forward intention: as a good macabre tale and as a satire on the Calvinist theology of his native Presbyterian church.

But with the passage of time more complex readings can be made; as an examination of a mind on the brink of collapse or, perhaps more import, especially from the perspective of the last century, the way in which people, both individually and collectively can be seduced into crime; and I’m thinking here not of crime as a social pathology but as a state-sponsored practice.

So, before proceeding, let me say a word or two about Calvinist theology. One of the central tenets is the doctrine of predestination. In simple terms this means that one is either bound for heaven or hell irrespective of one’s earthly actions. God, in other words, has already determined who will be among the Elect and who will be among the Damned. He does not do deals; so the Catholic teaching of justification by works - or the sale of Indulgences - is totally without merit. It’s a complex doctrine, almost impossible to explain in a few words. But the important point is this: one cannot be removed from the company of the Elect, because God cannot be wrong. Earthly actions are of no relevance whatsoever.

It is around this that Hogg’s novel takes shape. The narrator, Robert Wringham, the supposed author of the papers that make up the The Private Memoirs, is approached by a Mephistophelean figure known only as Gil-Martin. It is Martin who seduces Wringham, telling him that he is among the Elect, convincing him to believe that he is in this august company. So, what does it matter what he does in life? After all, this great truth cannot be alerted.

Convinced of this truth, and now beyond all normal moral boundaries, Wringham is seduced into murder and other crimes. So, here in proto-type, is the central dilemma later posed in existentialist literature, in the work of people like Dostoevsky and Camus. If there is no God, if there are no ethics, then the strong, those beyond the limits of good and evil, can do and act as they will.

The book caused an outrage among certain sections of the Scottish Presbyterian community when it was first published in 1824, so much so that subsequent editions had to be modified.

The Private Memoirs is a simple yet complex text, well ahead of it’s time, in the use of narrative and perspective; of stories within stories, of truth as lie, and lie as truth. The ambiguity is quite wonderful. We never quite know if Gil-Martin, who may very well be Satan himself, is real or simply a product of the narrator’s disturbed mind. Hogg never reveals the full truth!
Posted by Anastasia F-B at 15:46