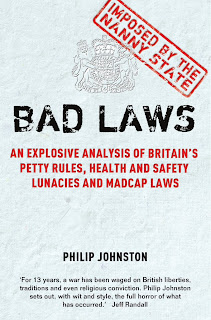 There is no more urgent task for the new British government –besides reducing the deficit – than reviewing the way this country has been governed over the past thirteen years. The previous administration was one of the worst we have ever had: lacking any big ideas it had to invent lots of small ones; it had to interfere with the liberty of the subject in such a way that not even Big Brother could have imagined possible.

I’m a historian by training, a specialist in the seventeenth century, in the period of Stuart absolutism. But, quite honestly, Charles I, Charles II and James II came nowhere near interfering with the basic rights of the citizen in the fashion of Blair and Brown, heading governments that even intruded into the most intimate areas of personal and family life.

The closest parallel I can think of is that of the rule of Cromwell’s Major Generals, a killjoy experiment much hated by the people of the day. James was overthrown in 1688 in the so-called Glorious Revolution less because of what he did and more by the fear of what he might do. Since 1997 we have had what might be referred to as an Inglorious Counter-Revolution, the rule of the new Major Generals, the Major Generals of New Labour.

I now have a copy of Philip Johnston’s Bad Laws, which serves as a thread to guide one through the labyrinth of laws and pettifogging rules that were inflicted on this nation over the past thirteen years. I’ve not a chance to read it all, but the passages I have alighted on at random have induced two conflicting emotions - amusement and anger; amusement at the absurdity, anger at the time-wasting pettiness. If I had been in charge of the Tory election campaign- and if I had pots of cash! – I would have issued a copy of this book to every home in the land.

We have been deluged with so many petty rules and criminal offences that it’s quite impossible to detail them all. The Hunting with Dogs Act was the one that made my blood boil. Even those who support this might not know is that more foxes have been killed every year since it was introduced, and by the ugliest means conceivable.

The stupidity went on and on. The Religious Hatred Act introduced thought crime straight from the pages of Nineteen-Eighty Four. The Licensing Act makes it an offence to play a piano in a pub without authorisation. Even circuses now have to apply for a license for every venue they visit.

This, like so many of the hard Labour laws, was a charter for the council jobsworths, the army of snoopers set to police the rules. In Birmingham Zippo’s Circus was threatened with prosecution if the clown act blew an exploding tuba, this being considered a ‘live music performance’ and thus requiring a licence!

And then there was the seventy-five-year-old blind man who was issued with a £40 fixed penalty notice after his dog pooped in a field, or people returning from a supermarket in Brighton who had their wine confiscated for being in possession of alcohol in a public place!

Various pieces of anti-terror legislation have been a greater threat to law-abiding British citizens than to any potential Osama bin-Laden. Trial by jury, a most ancient right, is under threat, and the European Arrest Warrant allows our citizens to be extradited to other jurisdictions for offences which are not considered crimes in England.

The Firearms Act effectively wiped out the sport and livelihood of thousands of people. The War Crimes Act has resulted in not a single conviction. It’s now illegal to own a Shetland Pony without it possessing a passport with a picture. The Regulation and Investigatory Powers Act, the grand snoopers’ charter, allows officials even to read private communications and to monitor the movements of law-abiding citizens. And there is no point in me starting on yuman rights and elf ‘n’ safety for fear of trying your patience, or extending this blog to prodigious lengths.

Since 1997 an additional 3000 criminal offences have been introduced, 1000 of them punishable by imprisonment. It’s as well to remember that a lot of this comes from the Central Committee of the European Soviet Union in Brussels, though it has harmonised quite well with Labour statist thinking, on the determination to micro-manage so many areas of our public and private lives.

From Identity Cards to Lunch Boxes each and every one of us has become a potential suspect, guilty until proved innocent. Sweep the lot away, sweep away the legacy of a dreadful thirteen years, either that or reintroduce Royal Absolutism, my favoured solution. We were much freer under its gentle guidance.

When, like committed linnets, I
With shriller throat shall sing
The sweetness, mercy, majesty,
And glories of my King;
When I shall voice aloud how good
He is, how great should be,
Enlargèd winds, that curl the flood,
Know no such liberty.

Stone walls do not a prison make,
Nor iron bars a cage;
Minds innocent and quiet take
That for an hermitage;
If I have freedom in my love
And in my soul am free,
Angels alone, that soar above,
Enjoy such liberty.
Posted by Anastasia F-B at 15:53