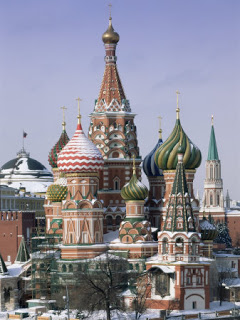 I spent Christmas in Moscow five years ago, the winter of my twentieth year. We only had few days in the city, a brief time to discover something of its secrets and its Byzantine charm. I do, I confess, have an exaggerated sense of romance and what a place to indulge this, the snow lying on the towers of the Kremlin and the domes of Saint Basil’s Cathedral!

We stayed in the National Hotel, not too far from Red Square in central Moscow. Arriving late the day before Christmas Eve we decided to dine in the hotel restaurant rather than go out. On the passageway leading towards the entrance one has to run a gauntlet, rows of photographs of former residents and guests. I could not recognise them all but those I did were enough to induce a slight shiver. Lenin had been, as had Stalin and Felix Dzerzhinsky, the founder of Cheka, the forerunner of all agencies of the Soviet Secret police. I expect Trotsky stayed there also at one time, though I could see no portrait; for the National Hotel had been the temporary headquarters of the Bolshevik Party after the capital was moved from Petrograd in 1918.

On Christmas Eve we went to the Bolshoi, one of my long-time ambitions, having bought tickets in advance on the net for a performance of Shostakovich’s opera Lady Macbeth of Mtsensk. Unfortunately the big theatre was closed at the time for repairs. The little theatre was impressive enough in its own right, so the big theatre must be truly splendid. The programme notes came with the chilling denunciation of the opera originally published in Pravda in 1936, and thought to be by Stalin himself, who ostentatiously walked out of a performance. The composer survived, but only after prostrating himself in the most abject way.

On Christmas Day – not a holiday in Orthodox Russia –we were taken on a personal tour of the Kremlin, discovering some of its hidden treasures, including the beautiful little churches where Ivan the Terrible once worshiped. There was a choir when we went in, beautiful singing that gave the place added atmosphere.

Elsewhere in the complex there was so much to see: the Faberge eggs given to the family of the last Tsar; the Severe Tea-set given by Napoleon to Alexander I after the Treaty of Tilsit. And then there were the boots that Peter the Great made for himself. Oh, what a giant of a man! 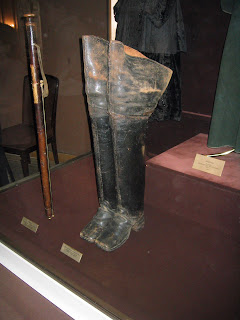 There is so much more I could tell, so much more we saw. And, yes, I did go and see Lenin on Red Square, though I’m not convinced that he is real. Still, if he is, he deserves no better fate, to be gawped at by the idle and the curious, forever denied the refuge and protection of the soil of Holy Russia. 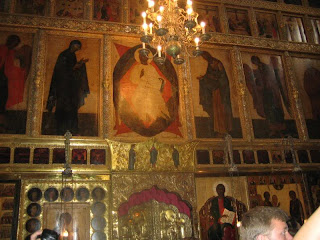 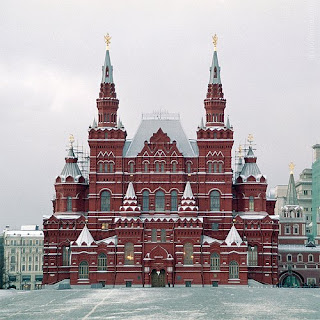