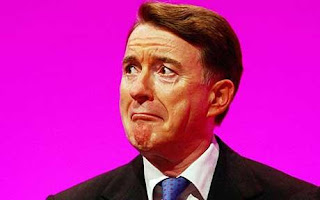 I could never quite understand why the last government placed such reliance on the twice-disgraced Peter, Baron Mandelson of Foy, a man whose shadow was scandal and whose technique was mismanagement. He was a disaster as a Labour minister and an even bigger disaster as a European commissioner (remember the trade war with China?) His last disservice to the Labour Party was surely in rescuing Gordon Brown from political oblivion and then running what must count as one of the most inept electoral campaigns in its history. For me he is a living symbol of the intellectual bankruptcy at the heart of the whole New Labour project, which was all about power, never principle.

Mandelson is the Labour Macbeth, in murkiness stepped in so far that should he wade no more, returning were as tedious as go o’er. Now the Daily Mail has exposed even more murkiness from his days as European Trade Commissioner. In 2005 he attended a dinner in Moscow as a ‘valuable extra’ with Oleg Deripaska, a Russian oligarch, the kind of person much favoured by the socially insecure Mandelson, and the executives of Alcona, the American metals company.

Alcona was involved in negotiations to buy two of the Russian’s giant RUSAL aluminium plants. The chief concern was over tariffs within the European Union, tariffs that would have prevented the markets being flooded with cheap imports from the east. Though there is no evidence that Mandelson played any active role, his last minute appearance, arranged with such haste that he did not even have a valid visa – strings had to be pulled within the KGB - was enough to reassure the anxious American executives. The deal was duly concluded and in the following three years tariffs on metal imports were slashed. Not, I hasten to add, that there was any connection between the one and the other. :-)

So, where’s the beef? It was just another business deal. But the problem is, you see, that this deal, concluded under such questionable circumstances, took away British jobs from British workers. Metal plants were closed in South Wales and Scotland. I should add that Mandelson’s ‘silent’ presence, a little like the ghost of Banqo, to extend my Macbeth metaphor, was arranged by his good friend Nat Rothschild, who was also at the feast, anxious to smooth the way for the sale. Although Mandelson has so far declined to comment, a senior spokesman for the EU said that all tariff decisions were taken in full transparency, though he added that he was totally unaware of the Moscow dinner.

This seems to me to be typical Mandelson, not obviously culpable, just amazingly foolish, involving himself in situations that a wise person would avoid, failing to see his presence alone, certainly under such questionable circumstances, was enough to compromise him. He is a man easily flattered, easily seduced by the rich and the powerful. He is a man who, in his complete lack of judgement, has allowed himself to be manipulated and used. We’ve seen it time and again, not corrupt just blindingly naïve. He was never fit for any kind of senior office. His ability to move with ease from post to post through the Labour establishment is surely a sign of the decadence of modern politics.
Posted by Anastasia F-B at 16:14