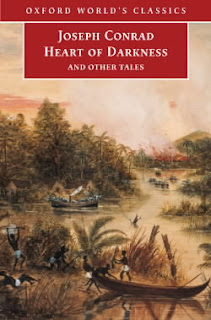 Joseph Conrad’s novella Heart of Darkness reflected a new awareness that all was not well with the European 'civilizing' mission in Africa; that imperial expansion had become a cover for a venture which increasingly subverted local life.

It was in consequence of this that the African Society was founded in 1900, in memory of the writer and ethnographer, Mary Kingsley, dedicated to building up respect for African customs and changing European understanding about Africa and the Africans. The West African Mail was launched in 1903 by E D Morel, with the aim of supplying 'reliable and impartial intelligence' on West African issues. More and more journalists and writers began to condemn what was happening in Africa, not just in the Congo, but elsewhere, particularly South-West Africa, where the Germans were carrying out the first genocide of the twentieth century. Another British journalist, H W Nevinson, investigated slavery in Portuguese West Africa, publishing his findings in 1906 as A Modern Slavery.

To add to Conrad's fictional treatment of the horrors of colonial exploitation, Mark Twain wrote King Leopold's Soliloquy, and Arthur Conan Doyle The Crime of the Congo. In Red Rubber, published in 1906, Morel made it clear that the worst of Leopold's atrocities had been a consequence of the rising world demand for rubber for the growing automobile industry. It is no coincidence, perhaps, that the first Model T came of the Ford assembly line in the same year. In 1909, in an attempt to strengthen the front against the abuses in Africa, the Anti-Slavery Society united with the Aborigines Protection Society to form a single Anti-Slavery and Aborigines Protection Society. This investigated abuses not just in Africa but all over the world, including the Putumayo atrocities in South America.

Heart of Darkness came at just the right moment in history. But in the end, when Marlow returns to Brussels to report Kurtz's death to his fiancé, he hides the truth under a comforting fiction. Some realities are just too hard to bear.
Posted by Anastasia F-B at 16:45