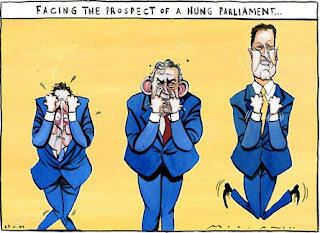 The world will know by now that England has a ‘hung parliament’ an expression that is taken from ‘hung jury’, meaning no clear decision has emerged. The Tory Party gained almost a hundred seats, one of the most significant electoral advances in its history, but one that still left it short of an overall majority in the House of Commons. Labour and the Liberal Democrats both lost seats and votes, with the former having a share of the vote as bad as 1983, a real electoral disaster, and the latter failing to make the much promised breakthrough, despite all the media hype.

This party is a positive danger to the country, this party of proportional representation, unlimited immigration and unilateral nuclear disarmament. Yet, here we are with these amateurs effectively dictating terms. We have had a whole weekend without an effective government, without any clear idea of where we are going. If one wants to see the future, a future with a ‘fair’ voting system then one could do no better than look at the present.

There was a demonstration in London yesterday in favour of the aforesaid ‘fair’ voting system, presumably to put some iron in the soul of Nick Clegg, the Liberal Democrat leader. A ‘fair’ voting system, however it is devised, is the worst possible option for this country. Never again would a party be returned with a strong mandate. Manifestos would almost invariably be based on a lie because no clear programme would be possible.

The Liberal Democrats, third, always third, would forever be in a position to dictate terms. They would also most likely enter into a permanent and undemocratic ‘progressive’ bloc with Labour, forever blocking a right-of-centre programme, even if that is what a majority of the electorate wanted. A ‘fair’ voting system is the worst possible solution, no matter how loud rent-a-mob shouts out platitudes and slogans. These people have not got the first clue.
Posted by Anastasia F-B at 17:04