Go Home and Prepare for Government 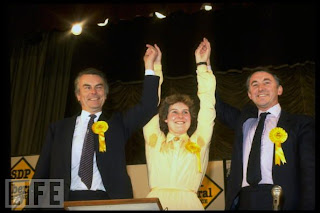 I wrote this piece for another website but I'm adding it here, dedicated to my friend Adam, in thanks for his appreciation. :-)

There is a famous moment in Liberal Party history –perhaps some people reading this will remember it? –when David Steel, a former leader, roused the troops at the end of his conference speech, telling them to loud applause that they should “go back to their constituencies and prepare for government.”

This was a time when David Owen and the Social Democrats, fellow travellers with the Liberals in pre-merger days, were on the up and up; this was a time when the Labour Party was in disarray; it was a time when Margaret Thatcher was facing some of her toughest challenges. It was 1981. What happened? The Falklands happened, the general election of 1983 happened, Margaret Thatcher cruised to one of her greatest victories, and poor David Dee and David Dum never got their snouts anywhere near the trough of office.

It’s been something of a burden the party has had to carry over the years, a stick to beat the poor dears with, an indication of just how pompously self-inflated they could become, what a joke they are, this ‘David Steel moment’. So, no matter what their present expectations, one is unlikely to hear Nick Clegg or any senior member of his party offer such a stupid hostage to fortune. But, hold on just a moment; have I’ve got news for you – this campaign has produced its very own David Steel moment, and appropriately enough it comes from Scotland.

There Alistair Carmichael, the party’s Scottish affairs spokesman, said that it was “increasingly likely” that the Liberal Democrats would either be the largest party in a coalition or they would win an outright majority, and all on the basis of a telly debate!

The Lib Dems are surfing on the top of the wave; they are the irresistible force, moving forward by rapid stages. Their time has come; they’re set to win their first election since 1910. Ladies and gentlemen, boys and girls – go home and prepare for government!

Everybody loves a winner
So nobody loved me;
'Lady Peaceful,' 'Lady Happy,'
That's what I long to be
All the odds are in my favour
Something's bound to begin
It's got to happen, happen sometime
Maybe this time I'll win
Posted by Anastasia F-B at 16:35