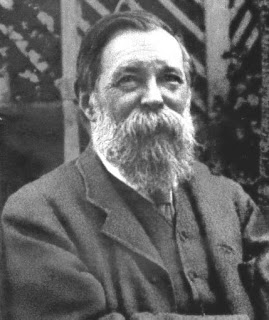 It is to Friedrich Engels that we owe the materialist interpretation of history. Not only did he invent the term, but he refined and, more important, interpreted the work of Karl Marx, handing it down like Moses in tablets of stone to the Social Democratic Party of Germany, the leading left-wing movement of the day. The problem is that Engels, while he tried to be true to the thinking of his mentor, began to act as if it was sacred canon, introducing a degree of rigidity that was not in the original; turning fluid observations into concrete precepts, what he called 'the great law of motion in history.' Marx’s sociology was thus transformed into a kind of deterministic science, comparable, in Engel's view, with the laws of energy.

It was Engels, not Marx, who saw economics as the ultimate foundations of all social and historical structures. He attempted, towards the end of his life, to correct some of the damage done in turning Marxism into a materialist pseudo-science, though by this time it was altogether too late. His earlier interpretations conveyed a simplicity readily understood by those with less subtle intellects, those looking for straightforward dogmatics; people for whom notions of base and superstructure offered a short-cut to understanding. Yes, he might very well be said to have 'invented' Marxism; and, yes, he might also claim the right to be its earliest gravedigger.
Posted by Anastasia F-B at 16:01