Death as the Price of Fame 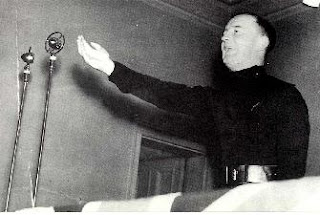 The post war execution of William Joyce, better known as Lord Haw Haw, on a charge of high treason was little better than an act of judicial murder, an opinion I am quite happy to share with A. J. P. Taylor, amongst others. Even Hartley Shawcross, who successfully prosecuted Joyce, was later to write of the case "It remains in my mind the one of which I am least proud."

You see, Joyce was born in New York, and therefore not a subject of the British crown; so he was in essence hanged for making a false statement on his 1933 application for a British passport, the usual penalty for which at the time was a £2.00 fine. He did not, moreover, by his words alone kill any subject of the crown, nor did he recruit for the enemy, unlike John Amery, who was also hanged for treason around the same time.

In essence, Joyce was executed not for what he did but for who he was. Death, for him, was the price of fame, a point made by Mary Kenny in her excellent biography, Germany Calling. There were, after all, other broadcasters for the Nazis, including one Margaret Bothamley, over whose nationality there was absolutely no doubt, released on a suspended sentence for essentially the same offence. But Lord Haw Haw could not be allowed to escape, could he now, not when much of the British press had decided the matter prior to his trail?

The whole business reminds me to some degree of George Orwell's essay Shooting an Elephant, where death is the result of the pressure of 'collective will'; where 'the state' is pushed forward by powers beyond its control. Who, after all, was Joyce that he deserved such special treatment? Was he any more than a rather pathetic individual, or, as Rebecca West put it in her trial report, "A queer little Irish peasant who had gone to some pain to make the worst of himself."
Posted by Anastasia F-B at 15:48