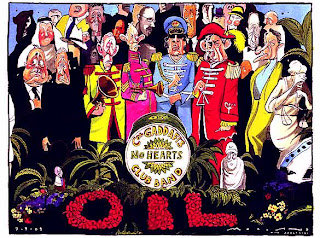 I saw a performance of The Third Man last year, a special sixtieth anniversary screening. It’s a particularly good example of film noir and must count as one of the best British movies ever made. I absolutely loved it; the atmosphere, the tension, the music, the setting, the direction, the screenplay and the acting. Joseph Cotton and Trevor Howard were both excellent but Orson Welles as Harry Lime, he was something else, in a different class altogether! There are lots of memorable lines but the most memorable surely has to be Lime’s observation about Switzerland;

In Italy for thirty years under the Borgias they had warfare, terror, murder and bloodshed but they produced Michelangelo, Leonardo da Vinci and the Renaissance. In Switzerland, they had brotherly love; they had five hundred years of democracy and peace and what did that produce? The cuckoo clock.

Well, now the poor old Swiss, despite their promotion of brotherly love, have produced something beyond the cuckoo clock; they have managed to produce outrage in the breast of the great Cuckoo himself; they have managed to upset Colonel Gaddafi, this King of Kings. Yes, that’s one of the titles he has bestowed on himself. Anyway, the King of Kings has called for a holy war against the “obscene, infidel” state of Switzerland. Why? It’s the minarets, of course, the Swiss decision to allow no more to cut into their obscene and infidel horizons;

Those who destroy God’s mosques deserve to be attacked through jihad and if Switzerland was on our borders we would fight it. Jihad against Switzerland, against Zionism, against foreign aggression is not terrorism.

So, now you know!

I’m sure even the Cuckoo of Cuckoos knows that we live in an age where states do not have to share a common border to make war on one another. It’s all just so much hot air and petulant bluster or the Libyan air force would even now be on its way to Zurich. That’s one way of looking at it; another way would be to see this as an invitation to terrorist attacks on Switzerland, the kind of attacks that Libya specialised not so long ago, the kind of thing that led to Lockerbie.

Who, I have to ask myself, in their right mind would do business with this man, so obviously mentally unbalanced and delusional. Well, we do, for one, this Labour government does; Peter Mandelson, Lord Rumbo of Rio, does, having a particularly cosy relationship with the Cuckoo’s son. His government, the government of Mad Gordon Brown, effectively betrayed those who died in the Lockerbie outrage to clear the way to deals over oil and gas, as wretched a piece of appeasement as I can conceive.