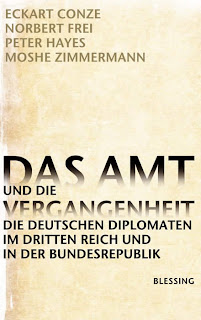 I saw from a report in the press on Saturday that the exhibition on Hitler and the Nazis, currently on show in the Berlin Historical Museum, is drawing the crowds, hardly surprising, considering that it’s the first time ever such an event has been staged. It’s part of a ‘coming to terms’ process long delayed in Germany, which suffered for so many years from a self-induced historical amnesia.

Now comes Das Amt und die Vergangenheit (The Ministry and the Past), an official publication by the Foreign Ministry detailing the department’s activities during the Nazi era. Das Amt has caused a minor stir; it even featured in the main evening news broadcast here not so long ago. The issue is this: the official line long taken by the Foreign Ministry is that it was not complicit in the crimes of the Nazi regime; that it was manned by ‘gentlemen’ in every way different from the downmarket fanatics in other branches of government. This is far from being the case, as Das Amt has confirmed. The Foreign Office was complicit in the very worst crimes, including the Holocaust.

I have to say that I was more than a little surprised at this ‘revelation.’ The historical record is absolutely clear. Though there were certainly diplomats who took an active part in resisting and undermining the regime, most were complicit even in the basest actions. Joachim von Ribbentrop, the Foreign Minister himself, was convicted and hanged on a charge of crimes against humanity, amongst other things. During the War, when normal diplomatic activity all but ceased, one of the remaining functions of the Ministry was to ensure the co-operation of Germany’s allies and satellites in the deportation of their Jewish populations to the death camps.

Das Amt, from what I have read, really only provides additional empirical support without breaking any new ground. It seems to be of greater use as an exercise in myth-breaking, in destroying a cosy and rather snobbish departmental consensus. The way it came about is rather interesting in itself. Joschka Fisher, the first foreign minister from the Green Party, a man with particular sensitivity over Holocaust issues, was disturbed by the self-congratulating complacency of the department, which even saw diplomats eulogising former Nazis in obituaries. The details have destroyed all remaining illusions. Eckart Conze, one of the four authors of the 880-page Das Amt, has gone so far to describe the Ministry under the Nazis as a “criminal organisation” in an interview with Der Spiegel.

The past is a ghost only ever put to rest by understanding, not denial.
Posted by Anastasia F-B at 15:46