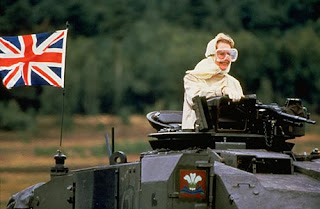 It’s now over twenty years since Margaret Thatcher left Downing Street, the consequence of a Caesar-style assassination that surely ranks as the nadir of the modern Conservative Party, the lowest point in its history. She’s a controversial figure, she remains a controversial figure, there is no point in denying that but, my goodness, love her or loath her, she casts every other British Prime Minister since the Second World War deep into the shadows.

I read articles by two completely contrasting historians, written to mark the occasion: one by Andrew Roberts in the Telegraph (My Tears for the Iron Lady) and the other by Dominic Sandbrook in the BBC History Magazine (The Jury’s still out on Thatcher’s legacy).

Roberts is a super historian, a personal favourite, who invariably makes one see the past in fresh and invigorating terms. He is also delightfully right-wing, a refreshing contrast to the Guardian-style orthodoxy of so many in the academic mainstream. He was twenty-seven at the time of the Iron Lady’s downfall. As a mark of his personal sorrow he bought some blue flowers to take to Number Ten, there to be greeted by a crowd of jubilant lefties outside the gate. “Bad day for you mate”, they shouted at him as he handed the flowers through to the policeman. “Yes”, he replied, “but a bad eleven and a half years for you.”

And so it was: a bad time for all those who sought to undermine and destroy this country. Who else but Thatcher could have stood up with such determination to trade union blackmailers, IRA hunger strikers, Argentinean generals and European Union bureaucrats? Above all, we must not forget her proudest achievement, the part she played in collaboration with Ronald Reagan in bringing the dreadful Soviet imperium in Eastern Europe to an end, finally redeeming the shabby betrayal of Yalta.

Roberts’ article was published shortly after Baroness Thatcher won the 25th Threadneedle Street Spectator Parliamentarian Awards for “Statesman of the Era.” Her achievements are so varied, not least the example she gave to women. Although she never professed to any form of feminism, at least a theory of feminism, her struggle through the ranks of the most male-dominated party in England and through the most male-dominated profession truly are inspiring, a practical role model who broke every glass ceiling that one can imagine. How shabby it is, then, that only last September Harriet Harman’s Equalities Office left her name off a list celebrating fifty years of women in power, while including utter nonentities like Baroness Scotland and Diane Abbott.

Considering the present crisis in the eurozone, Roberts provides a timely reminder that it was the issue of Europe that provided the spur for Brutus and his cronies, not the Poll Tax, as so often assumed. Geoffrey Howe, a man who makes dead sheep look positively exciting, executed the first cut, resigned from her government precisely because she would not agree to a timetable for British entry into monetary union. It was her Commons speech of August 1990 opposing economic and monetary union that turned Howe and the rest of his ghastly Europhile gang against her, bringing the end to her premiership and beginning a twenty year crisis in the Tory Party. How grateful we should all be for her courage and foresight, courage that went so far as sacrificing her political life.

Since we are used to seeing Mrs Thatcher as a hugely controversial figure, we easily forget how unusual this is. Twenty years after his resignation in 1976, Harold Wilson was almost totally forgotten. The twentieth anniversary of Attlee’s departure in 1951 passed off almost unnoticed, and I doubt many people will care much about Tony Blair in 2027. Even David Lloyd George, perhaps the only 20th century prime minister who rivals her as a genuinely divisive character, had become largely irrelevant by 1942…Mrs Thatcher, I suspect, will go down in history as one of those endlessly controversial characters that English history seems to do so well.

I can’t argue against his conclusion, the parallel he draws between Baroness Thatcher and Oliver Cromwell, another middle-class radical and enduringly controversial figure in our history. Here we are, three hundred and fifty years on, and there is till no consensus on Cromwell…but people are still talking. I agree that, projecting the same period into the future, that people will still be talking, and arguing, about the legacy of Baroness Thatcher. I can think of no better measure of her greatness.
Posted by Anastasia F-B at 15:55