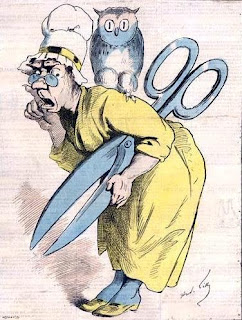 The female most associated with France is Marianne, the symbol of liberty, of freedom, of the republic and of revolution. But what I did not know, what I found out only recently, is that Marianne has a sister, altogether more censorious and far less interested in freedom. Her name is –can you guess? – Anastasia!

Anastasia, or rather Madame Anastasie, was brought to my attention here by Dominic, who came across a reference to her in the pages of Proust as a figure representing official censorship in France during the First World War. She appears specifically in Finding Time Again, the last volume of Remembrance of Things Past, where the line appears “I do hope the most-high and all-powerful Anastasia doesn't blue-pencil us!"

Dominic started the ball rolling; I decided to kick it further. The whole thing is quite intriguing – it intrigues me – because I can only take the story so far. It looks as if the original figure of Anastasia, armed with a large pair of sheers or scissors, was created sometime in the 1870s by the caricaturist André Gill specifically to represent the official censor, who counted political caricature high among his targets. The thing is none of the sources make it clear if Anastasia, the tight-lipped old maid, was already in existence in some form or other before Gill gave her a definite shape.

The obvious question is why Anastasia, why was the censor given that name? The short answer is that it’s impossible to say with any precision. The suggestions that do exist, self-referential and unanchored in any original source, are not wholly convincing. More than that, they are contradictory and fairly obscure.

It could refer to a Saint Anastasia who was martyred during the third century persecution of the Christians by the Emperor Decius. Amongst other things she is alleged to have had her tongue cut out. An article in Time Magazine published in December 1939 repeats the tongue story, but says that this was because she resisted the advances of the Emperor Valerian, who, interestingly enough, had been chosen as censor by the Senate after Decius revived the office.

The other possibility, the one favoured by the French sources, seems even more obscure. Anastasia is said to be based on Pope Anastasius I who, in condemning the work of Origen, the Alexandrian scholar and theologian, began a tradition of Christian censorship. It seems more obscure to me because it’s difficult to believe that this kind of rarefied debate would have impacted at all on the popular imagination, unlike virgins and tongues!

Though the Press Law of 1881, guaranteeing free expression, sent the old girl into a partial hibernation, she and her sheers got back to work after the outbreak of the First World War. That is to say that official censorship was once again given her unprepossessing shape by Le Canard enchaîné,- The Chained Duck -, a satirical magazine established in 1915, which attempted to escape the fatal cuts by using word games and other diversions, probably beyond the old lady’s comprehension! Interestingly she seems never to have been unduly concerned by adverse depictions of herself, which survived intact.

L’Ouevre, which also appeared in 1915 as a daily newspaper, was another publication that came under the gaze of Anastasia. Whole swathes of material were disallowed, to which the editor responded by publishing a single white space to the right of the masthead with the word Chut! (Shush!)

The Second World War brought the sheers back, but the censorship was considered so onerous that protests were even raised in the Chamber of Deputies. According to a Time report of March 1940, Leon Blum, leader of the Socialist Party and Prime Minister at the time of the pre-war Popular Front, said that Anastasia’s conduct showed “absolute incompetence” and “ridiculous ignorance.” The French, he continued, were even more starved of hard news than the Germans.

So, this is it, this is the story of the French Anastasia. She is now back in hibernation; she has been for years, perhaps for good. But when it comes to legends, and archetypes, and Anastasias one should never say never. :-) 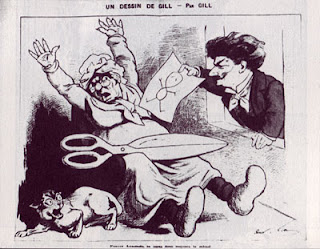