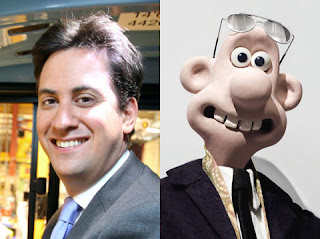 I really love Wallace and Gromit, my favourite animation by far, one that absolutely delighted me when I was growing up: Wallace, an inventor in the Heath Robinson style, and Gromit, his wonderful dog. So it came as a bit of a shock when I looked at the Times on Saturday. There he is, Wallace himself in the paper’s main political cartoon on a student demonstration, except it’s not Wallace at all – it’s Ed Miliband, leader of the Labour Party! The really shocking thing is that he looks like Wallace, the same teeth, the same weird eyes.

I’ve been doing a quick spot of internet research and it’s now clear that the buzz on this goes back some way. During his victory speech at the Labour conference in September some commentators were already remarking on the resemblance. But it goes back even further than that. There is clearly a conspiracy at work; for, you see, Red Ed does not look like Wallace – he is Wallace!

I’m truly grateful to The Economic Voice for making me aware of The Facts in the Case of E Miliband. Writing for this gloriously informative online publication, Richard Henley Davis points out that the former minister for melting ice caps and light bulbs never appears on chat shows with Wallace because the two are one and the same. The information comes to him from a highly reliable source, Ian Rottweiler, a researcher for The Daily Something or Other;

Up until now Ed has managed to keep his true identity a secret by not making too many television appearances and ensuring no one can take a sample of his DNA, which he masks with a fake compulsive cleaning disorder. Mr Rottweiler who noticed his Mr Miliband’s strange ability to fall into a northern accent and his ability to invent useless objects on the spot was a clue that he was actually leading a double life so he decided to follow him for 3 months and stake out his house. However Ian was amazed when one night he watched as Ed’s moonlit silhouette appeared on the rooftop of his house riding a flying motorcycle and sidecar with wings attached.

Oh dear, another illusion gone, another hero dead. How will I cope? Well, I suppose I could drop my own secret identity as Tory Girl and follow Ed Wallace into the Labour Party. It’s so wonderfully bland these days, almost as bland as Wallace’s favourite cheese. But Ed is doing his best to give it just a spot of vim. Fronting student demonstrations, or not fronting student demonstrations, not being able to make up his mind one way the other, he recently announced that socialism is not a dirty word, that he intends to persuade the public that it is not a dirty word. I imagine he must have cleaned it up in one of his super machines.

Ed or Wallace, you take your pick, has a splendid socialist pedigree, the son of Ralph ‘if it shows any life at all nationalise it’ Miliband. Oh, but he does not think like dad; he does not want public ownership of everything; he simply wants to tackle the ‘big unfairnesses’, as he puts it, in our society.

That’s the odd thing about the Labour Party, about Labour governments, the more they talk about tackling the ‘big unfairnesses’ the bigger the unfairnesses seem to become. Life on a council estate, suffering bad health, rotting teeth, unemployed and on welfare, with no prospects at all, is this, I wonder, what is meant by a ‘big fairness’, a levelling down, perhaps? No?: well it’s all that Labour seems to offer so many of its benighted voters. After thirteen years of Blair and Brown it's all most of them got. But Ed Wallace is right: there are still too many ‘big unfairnesses’ as yet untouched, far too much free enterprise and unlicensed inventors, too many people wearing the wrong trousers.

Meanwhile Wallace or Ed, while you are thinking about the big fairnesses, I would really like an answer to that most perplexing question of all: what is wrong with Wensleydale? After all, there is no use prevaricating about the bush.