A song of songs 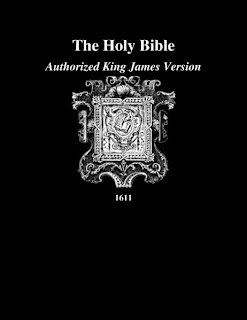 I love the English language; I love its beauty, its directness and its simplicity. There are wells of our language, sources where words and expressions were first drawn that people continue to use, often unconscious of their origin. The work of William Shakespeare is one of the most important; the other is the Authorised Version of the Bible, the King James Bible, the translation of which was completed in 1611, almost four hundred years ago.

So far as I am concerned the King James Bible is the Bible, though I have never known it used in worship: the Church of England has long favoured the modern translation. But I grew up in a literate household, one where I was introduced to a range of influences from an early age, including the translation of 1611, based on the earlier Bishop’s Bible of 1568 and William Tyndale’s New Testament of 1525.

There is a marvel to it, a sacred marvel, if you like, lost in modern translation, a marvel that was to have a huge impact on the subsequent course of English literature. I am tempted to say that in abandoning the King James Bible the Church of England abandoned sacred language altogether, the beginning of a process of secularisation, disengagement and decline.

I suppose the argument was that it was too difficult, too archaic, too remote from common understanding and contemporary concerns. If so, it’s rubbish. An editorial in the Times made reference to Politics and the English Language, my favourite essay by George Orwell, where he offers his own up to date translation of one of the most moving passages in Ecclesiastes, of good usage into the worst usage imaginable. Ecclesiastes proceeds as follows;

I returned and saw under the sun, that the race is not to the swift, nor the battle to the strong, neither yet bread to the wise, nor yet riches to men of understanding, nor yet favour to men of skill; but time and chance happeneth to them all.

The imagery, the cadence, the simple poetry of these words is intense. Now consider the version suggested by Orwell;

Objective considerations of contemporary phenomena compel the conclusion that success or failure in competitive activities exhibits no tendency to be commensurate with innate capacity, but that a considerable element of the unpredictable must invariably be taken into account.

It’s awful; it’s meant to be awful. Orwell admits it’s a parody, though not, as he says, a gross one. This essay was written over sixty years ago. If anything the problem has got worse since then, as meaningful, direct words are increasingly obscured in fog of abstraction. I’m ever mindful that the abuse of language and the abuse of meaning was part of the political horror that overtook humanity in the course of the last hundred years. There is nothing at all obscure or difficult in Ecclesiastes, nothing that could not be easily grasped and understood

So, as we approach the four hundredth anniversary, it’s time to think again about the importance of the King James Bible, time to restore it in its full cultural significance. I leave you with my favourite passage from The Song of Solomon, my favourite book of the Old Testament, a sublime hymn to love and renewal.

My beloved is like a roe or a young hart: behold, he standeth behind our wall, he looketh forth at the windows, shewing himself through the lattice.

My beloved spake, and said unto me, Rise up, my love, my fair one, and come away.
For, lo, the winter is past, the rain is over and gone;

The flowers appear on the earth; the time of the singing of birds is come, and the voice of the turtle is heard in our land;

The fig tree putteth forth her green figs, and the vines with the tender grape give a good smell. Arise, my love, my fair one, and come away.

O my dove, that art in the clefts of the rock, in the secret places of the stairs, let me see thy countenance, let me hear thy voice; for sweet is thy voice, and thy countenance is comely.

Take us the foxes, the little foxes, that spoil the vines: for our vines have tender grapes.

My beloved is mine, and I am his: he feedeth among the lilies.

Until the day break, and the shadows flee away, turn, my beloved, and be thou like a roe or a young hart upon the mountains of Bether.
Posted by Anastasia F-B at 15:47