The tale of Peter the Painter 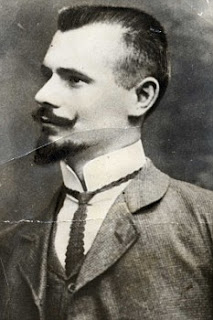 Jack the Ripper is one of the black legends of London’s East End. But let me bring another to your attention, one you may not have heard of. It's the story of a man simply known as Peter the Painter. Peter entered the stage of our history exactly one hundred years ago, and then exited it again, almost as completely and as mysteriously as Jack the Ripper.

Let me take you back to a different time, a different England, one so unconcerned by the prospects of terrorism that it was even possible to bring firearms and bomb-making equipment across the border without raising undue concern. It’s London in the early years of the twentieth century, a city full of exiles from the Russian Empire, coming in the wake of the abortive revolution of 1905. These exiles, Latvians and Lithuanians among them, were dedicated revolutionaries, many of them Bolsheviks, who took refuge among the Jewish community of Whitechapel.

Where there are Bolsheviks there are also Bolshevik methods, including the doctrine of ‘expropriation’, theft by all normal standards of crime. All is fair in the ends of revolution, all capitalists were fair game, even if the ‘capitalists’ in question were petty shopkeepers. And if anyone got in the way, even the horny handed sons of toil, then that was just too bad. After a gang of these desperados killed a fifteen year old boy and wounded fifteen other people in a botched robbery in 1909 they were lauded in the French left-wing press as “audacious comrades” under attack from “citizens, believers in the State and authority.”

A year later other ‘audacious comrades’ were at work, trying to break in to a run-down jeweller’s shop in the district of Houndsditch from an adjacent property. So loud was the noise that the neighbours called the police. They came, only to be greeted by gunfire, killing one officer outright and wounding a further four, two of them mortally. The gang in question, as Clive Bloom details in the latest issue of the BBC History Magazine (Terror on the Streets of London), were all members of ‘the Flame’, one of Lenin’s criminal front organisations. Its leader, according to legend, was Peter the Painter.

The murderers, who treated the English police as if they were the Okhrana, the notorious Tsarist secret police service, managed to escape, but in the subsequent manhunt they were discovered to be of Latvian origin. Eventually they were found, holed up at 100 Sydney Street, a three-floored tenement near a brewery. Peter the Painter was believed to be there. This time the police came armed. Thus began the Siege of Sydney Street.

The details given by Bloom in his account are really quite startling, almost amusingly so. Police incompetence is nothing new, but it’s the naïveté of the time that it’s most astonishing, a time of greater innocence, a time when criminals, even foreign criminals, were expected to understand the rules, the gamesmanship. Inspector Wensley, head of the Whitechapel force, began proceedings at Sydney Street by sending some officers to knock on the door, seemingly having learned nothing from the Houndsditch incident. When answer came there none they even threw pebbles at the window! These pebbles were greeted by gunfire, wounding one officer. Things now went from understatement to overkill.

Winston Churchill, then Home Secretary, was asked to provide military support. He did, and he also provided himself, helpfully armed, to be greeted by onlookers with shouts of “Oo let ‘em in”, an expression of their anger over lax immigration policy. He was also unwise enough to allow himself to be caught on film, later the cause of condescending comment in the foreign press, including the Russian and German, who offered helpful hints on modern policing methods!

The siege lasted for more than five hours, coming to an end in a shoot-out, with the building on fire. In the ruins the bodies of two men were found – Fritz Svaars and Joseph Sokolow. There was no sign of Peter the Painter.

Peter, like Jack the Ripper, was never to be caught. For a long time his presence was so elusive that questions were raised over his very existence. The problem here is that Russian revolutionaries were in the habit of using a huge number of code names and aliases. Lenin and Stalin had dozens before alighting on their final forms. Some of the more obscure figures are therefore almost impossible to trace. But, in the end, Peter was traced, although it took almost a hundred years. Discovered, yes, but in such a way that the mystery deepens even further.

In 2009 British scholars working in the Latvian archives managed to piece together the story of one Peter Piatkow, who also went by the name of Janis Zhaklis, a house painter and dedicated Bolshevik. Even before coming to London he had been involved in robbings and shootings in his native Latvia, then a province of the Russian Empire. As with so many others in the shady revolutionary underground, it’s also possible that he was working as a double-agent for the Okhrana.

But that’s it; there is nothing more. After 1911 Peter the Painter vanishes from history. It still cannot be proved that he was head of the Sydney Street gang or not; it cannot be proved that he was even there. There is just one tiny and intriguing fact, that of an unnamed prisoner in Stalin’s gulags who, as late as the 1950s, told intimate and detailed tales of the activities of the Bolshevik underground in London. Was this Peter the Painter? Alas, we will never know. There are some mysteries that history never reveals.
Posted by Anastasia F-B at 16:06