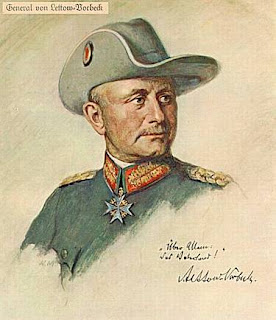 Having mentioned Paul von Lettow-Vorbeck in passing I now feel obliged to say a little more about him, the last of the German cavaliers; to say why I find him so admirable as a soldier and as a man. There is really no secret: he was as courageous as he was resourceful, carrying on a single-handed war in East Africa against superior Allied forces, keeping his small army in the field throughout the First World War, almost completely cut off from the Fatherland and any possibility of resupply.

Hunted from place to place, he raided Kenya, Uganda, Rhodesia, the Belgian Congo and Portuguese East Africa, always avoiding capture and escaping pursuit. He made the most effective use of the country and of his Askari troops, who were devoted to him. In the end he was the last German commander to surrender because he only received news of the Armistice in Europe after it was signed, formally laying down arms, undefeated in the way that his European colleagues were not undefeated, at Mbal in what is now Zambia on 23 November, 1918.

With a small contingent of German officers and non-commissioned offices, the backbone of his army were the Askaris, only some 2,500 men to begin in fourteen schutzttrupe, though additional recruitment would take his strength up to some 14,000, still only a fraction of those available to Jan Smuts and other Allied commanders. Lettow-Vorbeck, who could speak fluent Swahili, treated his soldiers with considerable respect at a time when African soldiers were viewed in colonial armies with racist and snobbish condescension. He told them that there was no difference between his white and his black soldiers, that they were all Africans. True to his perception, he appointed black officers, so far as I can gather the first European commander to do so.

Clearly he was driven by necessity here, though there really is not very much doubt that he valued his men as men. In the end he had only 1600 Askaris left, but he had achieved his aim of pinning down as many enemy troops as possible in an African 'side show', far from the Western Front. It seems to me that his action in deploying and using inferior forces in the most effective way possible bears comparison with that of General Thomas 'Stonewall' Jackson, particularly during the Valley Campaign of 1862 - hit and run, hit again, and hit again; advance where the enemy is weak, retreat when he is strong.

In Guerrilla: Colonel von Lettow-Vorbeck and Germany's East African Empire Edwin Hoyt described his four year campaign as "the greatest single guerrilla operation in history, and the most successful." After a brief interment he returned to Germany with his European troops, only some 120 survivors, in March 1919. For a demoralised nation the return of the Africans was the occasion for a brief moment of celebratory pride, as the they paraded down Unter den Linden in their faded and tattered colonial uniforms, Lettow-Vorbeck at their head mounted on a black charger.

Lettow-Vorbeck was soon caught up in the political chaos Weimar Germany, induced by left-wing adventurism. As a serving soldier he performed valuable service in suppressing the communist Spartacus rising in Hamburg, but his career came to an end in 1920 after he became a leading figure in the right-wing Kapp Putsch, whose aim was to install a military dictatorship intended stop the country's political anarchy.

Although he later sat in the Reichstag as deputy for the conservative German National People's Party, he was immensely distrustful of the Nazis. He avoided all personal compromise, even refusing Hitler's offer of the ambassadorship in London despite his straightened financial circumstances. In the 1960s a former schutztruppe officer was asked about this in an interview with the historian Charles Siller. "I understand that Lettow told Hitler to go fuck himself?", the question was put. "That's right", came the reply, "except I don't think he put it that politely." After this he was kept under surveillance by a regime, though he was still too well-respected in the country to suffer any further inconvenience.

Lettow-Vorbeck earned the respect of his former enemies. In 1929 he was even invited to London as the guest of honour at a reunion banquet for veterans of the East African campaign. There he met Jan Smuts for the first time, the two men remaining close friends until the latter's death in 1950. In 1953 he returned to East Africa, now the protectorate of Tanganyika, where he was received with full military honours by the British. But surely the greater honour, the greater source of pride, is that the surviving Askaris all turned out to greet him, singing Heia Safari, their old marching song.

Paul Emil von Lettow-Vorbeck died in 1964, now well into his nineties. He was buried with full military honours, two of his Askaris being flown to Germany to attend the ceremony. To mark the occasion the Bundestag agreed to pay back pay to all of the surviving African soldiers, a move he would have approved of, as he tried unsuccessfully to make this one of the conditions of his surrender in 1918.