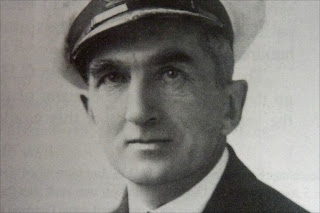 This time of year, more than any other, is a time to reflect on heroism and self-sacrifice. I imagine most people through their family histories will have some recollection or remembrance of bravery, even if only of duty done in intolerable circumstances.

I mentioned recently my own great-grandfather, who won the Military Cross at the Battle of Passchendaele. I should also like to recall the memory of my grandfather, who served in the British Indian Army, both before and during the Second World War. Advancing towards Mandalay in 1945, his battalion was ambushed by the Japanese rearguard. In immediate danger of his life, he was saved by Sergeant Khan, one of the Muslim soldiers in his company, but for whose prompt actions you would not be reading these words today.

But I would like to bring to your attention another man altogether, a sailor, a man whose selfless courage saved many lives, losing his own in the process. His name was Edward Stephen Fogarty Fegen, born in England of Irish parentage, captain of the HMS Jervis Bay.

The Jervis Bay was not a powerful man of war. No, she was a liner, a commercial ship, converted at the outbreak of the Second World War into an armed merchantman, assigned to convoy duty. Her most powerful weapon was a set of vintage 150mm calibre guns, no match even for a light cruiser. She was also unarmoured.

On November 5 1940 Jervis Bay was the sole escort for a convoy of thirty-seven ships sailing from Canada to Britain. In the afternoon of that day they had the misfortune to be intercepted by the Admiral Scheer, a German pocket battleship. The Scheer, launched in 1933, was part of a class of warship built under the restrictions on weight and size imposed on the German Navy by the Treaty of Versailles. Although inferior to the battleships and battle cruisers of the day, she was far better armed than any other cruiser, carrying as her principal weapon six guns with a calibre of 280mm, as well as another eight of 150mm and a torpedo battery. The Canadian convoy, spotted to the south of Iceland, was an ideal prize, given the poor level of protection. It would have been an easy prize but for Captain Fegen and the crew of Jervis Bay. 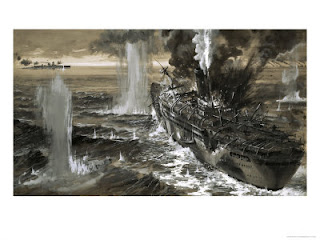 Realising the danger, Fegen ordered the convoy to scatter, himself immediately sailing towards the jaws of the Scheer to buy essential time. From this point the Jervis Bay only had twenty-four minutes of life left, but those twenty-four minutes were enough.

Of the convoy thirty-two ships managed to get away into the falling darkness. Outgunned and outranged, the Jervis Bay fought on, drawing the fire and using up the heavy ammunition of Admiral Scheer. One shot landed on the bridge, taking off the captain’s left arm. Jervis Bay kept up its own fire, drawing ever closer to the enemy, but always falling short. The outcome of this unequal battle was inevitable: the Jervis Bay, pounded relentlessly, went down ablaze, Captain Fegen and another one hundred and ninety-seven of the crew going down with her. The surviving fifty-nine were later picked up a neutral Swedish ship.

For his actions that day Captain Fegen was awarded a posthumous Victoria Cross, Britain’s highest award for bravery, for his “valour in challenging hopeless odds and giving his life to save the many ships it was his duty to protect.” He was a brave and noble Irishman, one who deserves to be placed in the same company as Drake and Nelson. I offer this in his memory.