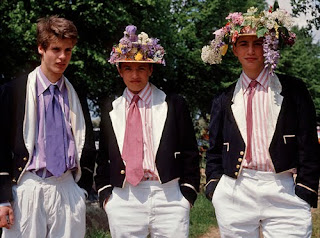 I was amused to discover that Rudolf von Ribbentrop, the son of Joachim von Ribbentrop, the Nazi diplomat, went to Westminster School when his father was ambassador to Great Britain in the 1930s. Ribbentrop junior, now in his late eighties, recently published a memoir detailing his time at one of England’s most prestigious public schools. When I say public I mean private, and when I say private I mean the fees are somewhere up in the stratosphere, which means that he would be in the company of boys from some of the best connected families in the land, the heart of the old establishment.

The thing is about the Nazis that, while they paraded themselves as the ‘master race’, they had a distinct inferiority complex when it came to the English upper classes. One only has to read Mein Kampf to understand just how enamoured Hitler was with the British way of doing things, particularly when it came to imperial matters. His favourite movie was The Lives of a Bengal Lancer, which he watched time and again, telling his court that it was Germany’s destiny to rule Russia in the way that the British ruled India.

So, it was quite a coup to have a Ribbentrop at Westminster, ready to pass back intelligence to the Fatherland, information on the thinking of the only people the Germans believed mattered. The problem was that neither he nor his father had a clue about English cultural attitudes or public school mores. When junior was asked if he wanted to join the school’s Officer Training Corps (OTC), one of the steady institutions of all the best schools, he passed the information back to his father, who immediately reported to Berlin that the English were preparing their public schoolboys for war, not pausing to think that, if they were, they would hardly invite the participation of a German!

On another occasion there was a debate on whether the German colonies, lost at the end of the First World War, should be returned. When the motion was carried (these things are always won or lost on debating points and skill, not on matters of principle) the information was also passed back to Germany, a sign that the British were willing to make concessions. When an MP visited the school to praise the League of Nations and criticise Hitler, junior rose to contradict him and was immediately slapped down by the master in attendance, saying that while questions were welcome speeches were not, again a fairly standard, and continuing, put down. The other boys, true to their nature and a collective sense of grievance, stood up and walked out, a gesture also misread by Hitler’s Bismarck, who interpreted this as a sign that British sympathy for German policies ran deep!

The poor old Germans; they tried so hard to understand without even getting close. Hitler as well as enjoying movies about the British also adopted what he took to be English style, reading the Tatler and insisting on full afternoon tea, drunk from the best bone china, when he was relaxing at the Berghof, his mountain retreat in Bavaria. Himmler shared his master’s enthusiasm for English manners and attitudes, placing cricket among the compulsory sports played at the SS officer’s school in Brunswick. In anticipation of victory in 1940 Walter Schellenberg, an SS intelligence expert, prepared a handbook which, amongst other things, praises public schools, particularly Eton, the best of them all, but warning his fellow officers not to put their sons names down, because it “is sold out until 1949.” Even the Nazis, as it says in the Times, had absorbed enough of the English spirit to understand that queue jumping for Britain’s best school was simply not the thing, old boy.

So, the Germans, having conquered Poland and France, anticipating conquering Britain beyond, realised that there were clear limits even to their power: they were prepared to be beaten by Eton! 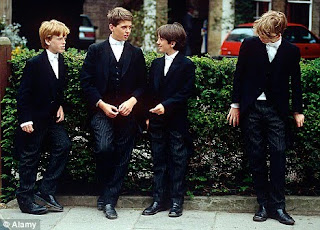