The faces of Janus – a response to Calvin 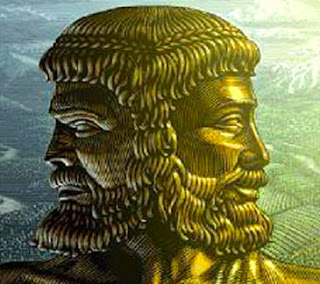 Calvin, there are two things you must understand about me: I’m a rationalist…and a romantic! The seventeenth century is by far my favourite period in history, the time of the Stuarts, the time of the Civil Wars. If I had been living then I like to think that I would have been cast in the same mould as Charlotte de La Trémoille, Countess of Derby, a royalist who in 1644 successfully defended Lathom House with only a few men against a much larger enemy force, led for part of the time by Sir Thomas Fairfax in person, the foremost parliamentary soldier.

What was the depth of her attachment? It was based on emotion, on loyalty and on the attractions of legitimacy; on a belief that Charles I, the king, had been divinely appointed and that monarchy was the rightful government of the land. It’s an institution honoured by tradition; it’s an institution that continues to be honoured by tradition. It was for Charlotte de La Trémoille; it is for me.

But, you are right: strip it back and kingship, any form of monarchy, arose in the way you suggest; that it is an original exercise in tribal power obscured by the passage of time, sanctified by the veneer of religion. You might, if you have not already done so, have a look at William Hazlitt’s ‘demolition’ of royalty and divine right in his essays On the Spirit of Monarchy and On the Connection Between Toad Eaters and Tyrants, both written in the early part of nineteenth century, in which he more or less makes the same observation as you: that a king is no more than a rich thug surrounded by a gang of flunkies. As for your point about Mugabe and Blair it’s something I addressed myself in L'etat, C'est Moi – a response to Adam.

You are also right about our present Queen: she is a monarch by honour and tradition alone. Her powers, the powers of the royal house itself, have devolved over time to the office of prime minister, the real source of power in our constitution, more important than parliament itself, with forms of patronage that Charles I would have envied. But the Queen is still transcendent; the Queen and her heirs represent the nation at a deeper level, at a level above politics. We all require some kind of symbolism to identify with, a flag in your case, a person in ours. There are no rational arguments I can draw on here to justify this process, because none exists. It’s all about emotion, all about sentiment.

Now, why do I prefer monarchy to the other traditions you mention? To begin with I would say that monarchy both incorporates and transcends a theocratic tradition, too narrowly based in itself to stand the test of time and change. Purely sacred monarchies had a tendency to collapse when they lost the mandate of heaven. Democracy and anarchy, to take these purely as intellectual concepts, might be said to be so closely allied that there is little practical difference; that pure democracy is anarchy, and anarchy is unworkable as national idea. Roman democracy collapsed in anarchy. The state was only saved by a new form of monarchy.

So, I’m a monarchist, a royalist, to be exact, because royalty gave shape to my nation, because it gave cohesion and identity where there was none; it gave continuity through time. Continuity, now that’s the thing. Thinking specifically about England regicide was the exception, not the rule. Kings were removed, yes, often because of incompetence, but they were invariably replaced by other kings from the same family, not by outsiders. The seventeenth century regicide is the great exception here, when Charles I was replaced by a republic. What then happened? Why, the republic was replaced by a monarchy, which became a republic again, a position of constitutional chaos only resolved by the return of the King!

The King returned in 1660, that’s true, but matters were never quite the same again. Absolutism - which never really existed in England in the sense of Brunei or Saudi Arabia in any case - had but a limited lease. A new monarchy arose in 1688, one that has been adapting and modifying ever since, one that takes the shape of the age. That’s why it’s been so enduring, that and the fact that it was still able to stand above the common political fray.

In the end it all comes down to sentiment and romance, I can give you no better reason for my attachment to royalty than that. The origins are unimportant; only the tradition matters. Besides, I have the luxury, which you do not, of being able to hate the head of government while loving the head of state. Surely there can be no better reason for believing that royalty is the best possible institution for my nation? Others can do things differently. We should just muddle along as we have for the past thousand years or so! And, if I can return to my previous blog, I have now taken Kate Middleton completely to my heart, a sign that tradition and novelty is the Janus image that England shows to the world, looking back and looking forward at one and the same time. I hope we always shall.
Posted by Anastasia F-B at 10:38