A load of balls 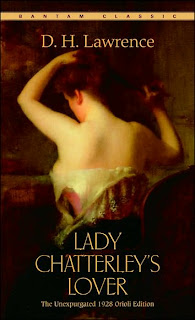 Is it possible to believe that the publication of a single book, a novel, would begin a major shift in sexual and cultural attitudes; that it would stand as marker on the road to free expression? Well, it did. The book in question is Lady Chatterley’s Lover by D. H Lawrence, a sexually explicit novel whose publication was only officially allowed in England in November 1960, thirty years after the author’s death, following the failure of a prosecution under the Obscene Publications Act. Philip Larkin’s poem Annus Mirabilis opens with his own wryly humorous comment on the significance of this;

In retrospect it’s difficult to believe just how backward, how antediluvian attitudes were, particularly among the political and legal establishment, towards sexual and artistic freedom in England prior to the lifting of the Chatterley ban, well out of step with far more progressive attitudes to such matters on Continental Europe. Even the mildest sexual references could provoke a reaction.

In 1928, for example, Radclyffe Hall’s The Well of Loneliness, a novel which touched ever so gently on lesbian themes, was destroyed on the orders of a magistrate, horrified that a single line (“and that night they were not divided”) meant that the female protagonists had gone to bed together! The prosecution had even trundled in Rudyard Kipling, by then well past his best by date, just in case a literary expert was required, ready to persuade the court of the need “to keep the Empire pure.”

Publishers continued to be prosecuted for breaching uncodified rules on censorship for years after. Even as late as the 1950s books by James Joyce, Henry Miller, Lawrence Durrell and Cyril Connolly, amongst others, were only available to those who were able to bring them back from Paris, concealed, of course, from customs officials.

Then came the trial fifty years ago of Lady Chatterley’s Lover, which turned out to be a kind of contest between the old and the new. It actually began as a provocation, a test of the 1959 Obscene Publications Act, introduced with high-minded intentions, namely to draw a clear line separating literature from pornography. It was the decision of Penguin Books to publish an unexpurgated paperback edition that set the law in motion.

But what a challenge Lady Chatterley was for the morally self-righteous establishment: not only did it use the word fuck a lot, in the midst of a lot of fucking, but a titled lady was being fucked by the family gamekeeper. The horror! The horror! At one point Mervin Griffith-Jones, leading the prosecution, so antique that he would have been out of place in the nineteenth century, actually asked the jury, all male, of course, if they “would allow your wife or even your servants to read this book?” His was a world where wives were property and servants knew their place. Perhaps the worst thing of all from the perspective of Griffith-Jones and the winged-collared brigade is that the Penguin paperback was available for a few shillings (about twenty pence), well within the means of the randiest game keeper with an eye on aristocratic and frustrated wives!

Just as Kipling was ready to testify for the prosecution in 1928, a whole range of impressive literary figures had been contacted, this time, though, on behalf of the defence. The Obscene Publications Act allowed for expert testimony on a book’s literary merits, a provision not lost on the Penguin defence team. They managed to assemble a panel of the great and the greater of contemporary English letters: people like E. M Foster, Iris Murdoch, T. S Elliot, Graham Greene, J. B. Priestley and Aldous Huxley, to mention but a few, people who were prepared to testify directly or to write testimonials on the novel’s behalf.

There was one exception. Evelyn Waugh demurred, describing Lady Chatterley’s Lover as “dull, absurd in places and pretentious.” Of course none of this was relevant under the law. If it was a great many novels would fail the test, and save us all some excruciating hours! I think the prosecution was wrong, I think censorship in literature is wrong, and I’m glad that Penguin Books won the case…but I’m still in full agreement with Waugh: Lady Chatterley’s Lover is “dull, absurd in places and pretentious.”

The thing is I think Lawrence is a grossly overrated writer. I’ve read his main novels, beginning with Sons and Lovers, and I’ve hated them all; hated his overripe metaphysics, his bogus and insincere spirituality, his inflated and unlikable characters and his florid use of language.

There is nothing in Lady Chatterley’s Lover that could possibly ‘deprave and corrupt’, the test under the 1959 Act; it’s just an overblown mess, a bad book by a second rate writer. All the naughty words, all the ‘arse’, ‘fuck’, ‘fucking’, ‘shit’ and ‘balls’ will never make up for the fact that Lady Chatterley, like the rest of this unpleasant man’s canon, is, well, a load of balls. :-)
Posted by Anastasia F-B at 17:21