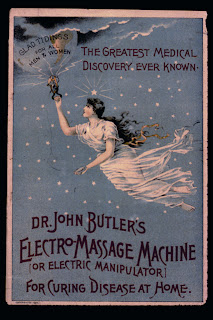 It’s the 1880s, a time when a great many of the medical problems suffered by women were put down loosely to ‘hysteria.’ This condition, which comes down essentially to one thing, sexual frustration, has a long history in medicine, going all the way back to Galen and the ancients. It comes from hysteros, the Greek word for the womb, since a whole variety of symptoms, anything from anxiety to erotic fantasy, were believed to be the result of a blocked reproductive system. What was the remedy, you may wonder? A spot of stimulation, that’s what, although not to be self-administered, and that’s on the best medical advice available. Avicenna, the Muslim founder of early modern medicine, wrote that it was “a man’s job, suitable only for husbands and doctors.” Hmmm.

There are records of ‘stimulation’ being carried out by doctors at least since 1653, with the final stages, the ‘pelvic massage’, most often being undertaken by mid-wives. We can go back still further, to the sixteenth century, when unmarried women, lacking in marital consolation, were urged to take “vigorous horseback exercise” or make use of a rocking horse or a swing. Horseback riding, yes, I can personally recommend that: there is no better source of natural massage or, ahem, stimulation!

Now we are in the nineteenth century, the high noon of medical professionalization and sexual prudery. The doctors are offering female patients release from their pent up frustration (presumably brought on by the sexual inadequacies of most Victorian men) in a course of treatment that would climax in something described as “hysterical paroxysm”; it would climax in, well, a climax! But in the absence of mid-wives, and reluctant to carry out the task themselves, for the best professional reasons, of course, a little buzzing friend made its way into history.

According to the movie, Doctor Joseph Mortimer Granville, played by Hugh Dancy, was the first to create the electromagnetic vibrator, or the ‘manipulator’ as it was known at the time. The idea was taken up by Hamilton Beach, and American company, and by the end of the century the manipulator was being mass marketed, appearing in shops and catalogues even before the plug-in version of the vacuum cleaner or the iron! Of course the whole thing had to be covered in lashings of Victorian hypocrisy, everyone pretending that it was about an identifiable medical condition when it was so obviously just about sexual release.

I’m off to London’s Science Museum next weekend because it apparently has a collection of more than forty early vibrators, something I did not know, something I simply must see. I was just so amused to discover this, so amused to discover that they were widely advertised at the time. I read in the Sunday press that Good Housekeeping, of all publications, ran a ‘tried and tested’ feature in 1909. Was the editorial office was full of smiling women? Yes, I expect it was. In 1918 Sears and Roebuck offered a vibrator attachment for a home motor, one that would also drive a churn, a mixer and a sewing machine! Who says that women are not versatile? A few years later portable vibrators were being promoted as “delightful companions.”