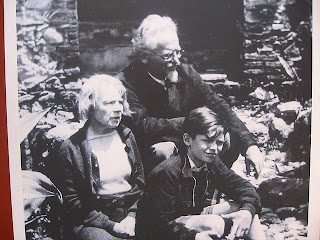 I mentioned last December that I visited the house, now a museum, of Leon Trotsky when I was in Mexico City, his last place of exile (The Artists and the Revolutionary). I walked through the bedroom where the bullet holes from the assassination attempt of May 1940, led by the artist David Siqueiros, can still be seen. And then there is the study where Ramon Mercader lethally assaulted him with an ice pick in August of that same year, a time when the world’s attention was elsewhere. Finally, in the garden, there he is: his grave, with the hammer and sickle carved. The whole thing simply filled me with a sense of melancholy, not readily dispelled by the hot Mexican sun. 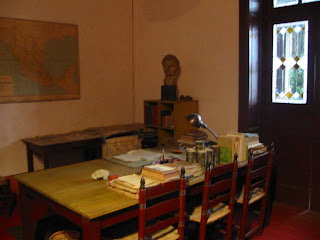 I have no sympathy at all for Trotsky as a politician or a thinker. But, my, how could I not be moved by a fate of a man who went from the height to the depths of history in such a short space of time; the hero of 1917 to the exile and outcast of 1940, living constantly in fear of his life. No longer the prophet armed, not even unarmed; simply irrelevant. 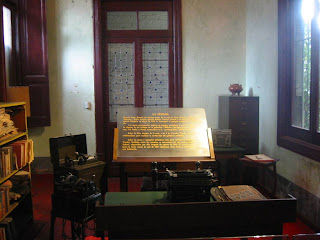 Trotsky was the author in so many ways of his own doom. A brilliant organiser, the man who created the Red Army almost single-handed and led it to victory in the Civil War, he was still a very poor judge of people, and quite hopeless when it came to playing the treacherous back-stabbing political game so favoured by the Bolshevik party, which became particularly intense after Lenin went into decline, suffering successive strokes before his death in January, 1924. Above all he misjudged Stalin, his nemesis, describing him as a ‘grey blur’, dismissing him in the most condescending and racist terms in a highly tendentious biography.

There is a tendency to assume that if Trotsky, rather than Stalin, had been the victor in the internecine party struggles of the 1920s things would have been so much better. I see no evidence at all for this. His conduct during the Civil War and after was just as brutal as any other Bolshevik apparatchik. More than that, the Stalinist programme of collectivisation and industrialisation, pursued with such murderous energy after 1928, was earlier the programme of Trotsky and the left opposition. Trotsky as Vohzd may have been less paranoid than Stalin. I do not believe he would have been less murderous, especially given that both men shared the same visceral hatred for the Russian peasantry.

When he died that August all those years ago he had long since been bypassed by the main currents of history, his rag-bag followers organised, if that’s the word, in the so-called Fourth International, another irrelevance. He died the last victim of the Moscow Show Trials, a victim of the relentless malice of Stalin, a victim of his own delusions. My previous assessment of the man still stands;

…one has to reflect that, in his days of power, it was he who denied life to others, who acted in a brutal and oppressive fashion, a fashion that closed so many futures forever. Too much was sacrificed on that abstract alter to which he dedicated his life, the alter of a frightful idol. We all, each and every one of us, only ever live in a perpetual present. It is a terrible thing to destroy others in the name of a bloodless utopia. 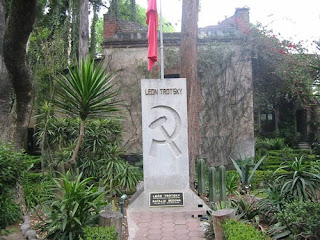