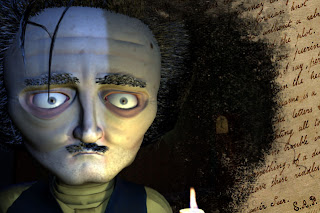 When it comes to genre fiction there is no writer who can match Edgar Allan Poe. It’s he who deserves the credit for creating the detective story and in developing new forms of science fiction; he who gave a new starkness and vitality to the Gothic form, free of the exotic excesses of a previous generation of writers, the kind off thing parodied by Jane Austen in Northanger Abbey. Add to this his poetry, with themes of loss, separation, death and madness then we really do have a unique and disturbing talent.

It was through the poetry that I first came to Poe, verses that unsettled and scared me; poems like The Raven and The Haunted Palace, the last verse of which is firmly settled in my memory;

And travellers, now, within that valley,
Through the red-litten windows see
Vast forms, that move fantastically
To a discordant melody,
While, like a ghastly rapid river,
Through the pale door
A hideous throng rush out forever
And laugh- but smile no more.

But there was something of a devil’s bargain here; his success, always hard won, was accompanied by the sense of loss, the absolute loss that he touches on in The Raven, of death and nevermore. He lost his mother Eliza at an early age to tuberculosis (TB), the great killer of the age; he lost Virginia Clemm, his cousin and child bride, to the same disease. The latter was particularly bad, for Virginia’s death was prolonged: she rallied in false hope at some points, only to sink still further at others, a spiral ever downwards.

I watched – if you’ve not already guessed – Edgar Allan Poe: Love, Death and Women, a documentary broadcast on BBC4, in which Denise Mina, a writer of crime fiction, had a look at Poe’s life through his relationship with significant female figures.

I have mixed feelings about arguments that try to detect elements of personal biography in an author’s work, but in Poe’s case a psychological explanation seems wholly convincing, particularly with regard the tragic details of the slow decline of Virginia. Her five year struggle impacted directly on Poe, causing his own steady descent into the alcoholism that was to kill him in the end. It also impacted on his work, his poetry, most particularly, and some of his fiction.

Take the disease itself, the nature of the disease, which wastes victims in a kind of hinterland between life and death. Apparently those suffering from TB can sink into a kind of catatonic torpor, characterised by shallow breathing, so shallow, so difficult to detect, that it can be mistaken for death itself. Hence the fear of being buried alive that haunted contemporary imagination, a fear that Poe makes use of in such stories as The Premature Burial, The Fall of the House of Usher, The Cask of Amontillado and Berenice. It’s really no surprise that this is the beginning of the age of the vampire.

Then there is the fear of death, the fear of ultimate and irredeemable separation, more real in Poe’s age than any other because the old Christian certainties were under question by science, even in the time before Darwin. Hence the desperate and hopeless appeal of the scholar to the Raven, an appeal for reassurance, rejected in one awful word;

The narrator in The Raven, incidentally, is clearly looking for consolation for the loss of Lenore in magic, not God, in his books of forgotten lore. Is it consolation, I begin to wonder, or is it something else; a message from beyond, or even resurrection? A messenger comes alright in the form of the black Raven, a devil bird destined to stay with him evermore. As for resurrection, in some kind of vampire or witch form, there is the story of Ligeia, who comes back to life in the body of another, or there is Morella, another voyager in the black arts, in volumes of forgotten and forbidden lore.

I’ve journeyed far from the themes of the BBC documentary, which was really about women as archetypes in the author’s life. Is there anything, anything more dreadful than an archetype? In the end it seems to me that Poe lived a half-life, somewhere between existence and non-existence, brilliant and sad at one and the same time. His own end in Baltimore, while still only forty years old, is as mysterious and macabre as anything in his fiction, a modern Faustus, laughing but smiling no more. 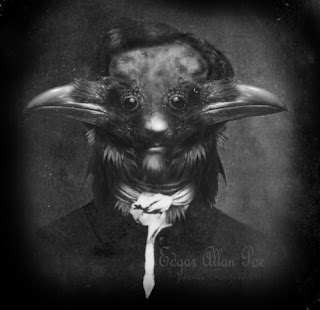