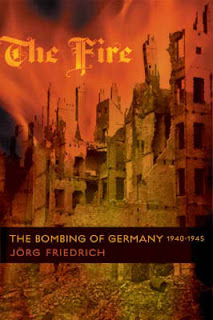 What follows is an exchange I had on Wikipedia’s Humanities desk a couple of years ago in answering a question on Jörg Friedrich’s revisionist history of the Allied bombing campaign against Germany during the Second World War. I’d forgotten all about it until I came across it while looking for something else. It’s an issue that carries powerful emotions. I certainly feel a deep sense of regret over the lives lost but also over the loss of some of the most beautiful Medieval and Renaissance cities and towns in Europe. But some things have to be understood in the context of the times, and the terrible sacrifice of the Allied airmen, suffering a casualty rate greater than those experienced even in the battles of the Great War, should not be forgotten. Anyway, the exchange is reproduced in its entirety

Ana. What can I say about The Fire: The Bombing of Germany 1940-1945? Is it good narrative? Yes, it is. More to the point, is it good history? Hmm....let me say this much: it comes in the form of accusation, accusation without strategic or political context. Not just my view, I hasten to add, but that of Bruce Kent, pacifist and anti-nuclear campaigner. Besides, recent research has done much to counter the argument that the Allied bombing campaign did little to weaken the German capacity to wage war. For those who have read, or intend to read, Friedrich's book might also, as a corrective, care to dip into Adam Tooze's The Wages of Destruction: The making and Breaking of the Nazi Economy (2006). Tooze concludes by saying "If the war was right-and surely it was-then the only criterion is whether bombing helped win it effectively. And in my view it did." There was horror, yes; but the real horror was the war itself. The responsibility for that lay not with Bomber Harris or any other British commander.

Response. I don't know Tooze's work so I can't comment on the economic argument, though I can say that "the ends justify the means" is a specifically amoral argument. What makes a just war is not simply the initial stakes, but the terms on which it is fought; what makes one just is not simply how unjust one's enemies are. Just because the Nazis were unquestionably unjust does not mean the Allies have carte blanche to act like monsters. The war did not compel the slaughter of innocents—that was a choice deliberately taken, a line deliberately crossed that they had the high mindedness to find repulsive at the beginning of the war, and indeed many thought it repulsive throughout and after the war.


Ana. Is war ever moral; has it ever been moral? War is, by its very nature, a nasty business, that has never, ever discriminated between the innocent and the guilty. The way it which it is fought, the methods used and the tone set, rather depends on the circumstances. There are some wars that can only be fought, if they are fought at all, with an absolute intention to win, regardless of the cost, regardless of the methods. There are wars, in other words, that do not permit the luxury of moral reflection. It might even be said that to stop and think is already to have lost.

So you believe that the Allies were 'monsters' for the 'slaughter of innocents' by aerial bombardment? Fine, that is your prerogative, though I personally am not comfortable with the emotive use of language. Bombing is just a form of aerial artillery. More 'innocents' were killed in the ground bombardment and assault on places like Budapest, Breslau and Berlin than in the bombing campaign of the western Allies. Should the Russians, then, have stood back and considered the amorality of their actions; that they were crossing a line into the repulsive? Indeed, the war did not compel the slaughter of the innocents; but it was not the Poles, nor the British, nor the French, nor the Danes, nor the Dutch, nor the Russians, and so on and so on, who started that war. If the Nazis had finished it the innocent would all have been on one side and the 'guilty' all on the other, regardless of age or military status.

Unlike you, I am not comfortable with value judgements, not comfortable with depicting men who risked their lives, men who died in unusually high numbers serving their country and doing their duty, as 'monsters'. In the main I prefer taking a strictly empirical approach in answering questions here, not revealing all that much about my personal feelings. On this question, though, I am prepared to make them plain: the Second World War was a just war and the bombing campaign played an essential part in securing victory. The campaign was absolutely justified and the men of Bomber Command deserve all honour for the part they played.
Posted by Anastasia F-B at 15:33