Daughter of the Confederacy 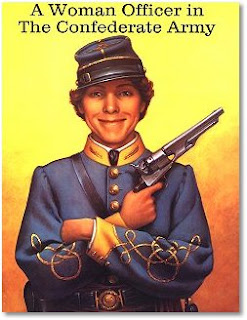 I have a fascination with all things connected with the American Civil War. My recent blog on Gone with the Wind was a hint on how much this period intrigues me, in many ways the defining stage of American history, the terrible furnace in which the nation was melted down and reformed in its modern shape. I have an interest in all aspects of the struggle, the political, the social and the military. I know, girls are not supposed to like tales of soldiers and tactics and strategy, but I do!

My interest originates in being taken to some of the sites associated with the conflict when I was quite young. I’ve read quite a lot now, both fiction and nonfiction, including Stephen Crane’s The Red Badge of Courage, the tales of Ambrose Bierce and Michael Shaara’s Killer Angels. I watched every episode of Ken Burns TV documentary, some of which made me cry, particularly the episode that concluded with Sullivan Ballou’s letter to his wife, written before his death at the First Battle of Bull Run. I’ve enjoyed some of the Civil War movies I’ve seen, Gone with the Wind, obviously, and more recent offerings like Gettysburg, Glory, Cold Mountain and Ride with the Devil. 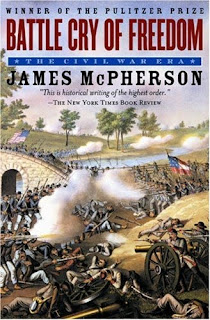 The best historical treatment I’ve read to date is The Battle Cry of Freedom by James Macpherson. Although written some years ago it has yet to be surpassed. I was going to buy Amanda Foreman’s recently published The World on Fire: An Epic History of Two Nations Divided. This interested me because it explores the question of British peripheral involvement. The problem is the reviews have been quite mixed, some glowing, others quite damning. It’s worth having a look at some of the polar positions on Amazon UK. I do so hope I’m not missing something significant here, but when I’m told that the author gets some very elementary facts wrong and that her book does not even contain a bibliography – a major oversight – then I do think this is probably best avoided.

Thanks to Ike Jakson, another blogger, my bedtime reading at present is Andersonville by McKinlay Kantor, a novel which won the Pulitzer Prize for Fiction in 1956. I’m now about a quarter of the way through, two hundred pages down, another six hundred to go! It tells the story of the notorious Camp Sumter, a Confederate prisoner of war camp near the town of Anderson in Georgia. Because of this the camp was more generally known to the inmates as Andersonville. I intend to review it in due course so I don’t want to say too much at present but I’m completely beguiled, horrified and fascinated at one and the same time.

Last year I read Jonathan Littell’s The Kindly Ones, a grossly overrated novel set largely in the Eastern Front during the Second World War. It carried one blurb comparing it to Tolstoy’s War and Peace, no more than stupid hyperbole. There is only one novel that I have read so far that could stand this comparison – Vassily Grossman’s superlative Life and Fate. But Kantor is looking really promising, a tremendous panorama of people and events, a great ebb and flow.

Looking at the war as an event in history I ask myself if it is it wise to take sides? No, of course it’s not, but I’ve never been wise! My sympathies have always been with lost causes; my sympathies are with the men and women of the Confederacy. You see I have a very selective imagination: I can abstract out the degradation of humans as chattel, the horror of Andersonville and the other tragedies of an epic and tragic struggle. My romantic vision allows me to embrace the idea of the Confederacy, if not all aspects of the reality. So, in Dixie Land I’ll make my stand. :-) 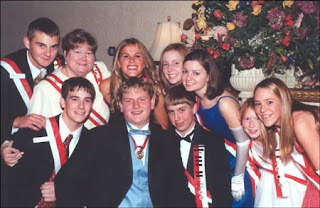