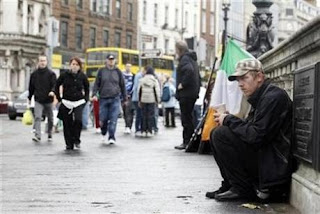 Hjalmar Schacht, the German financier and banker tried and acquitted for crimes against peace at Nuremberg, was a bit of a magician when it came to money, attested by the fact that one of his books is called The Magic of Money. He more or less ended the German inflation of the early 1920s by announcing that it was over, by replacing old paper money with new paper money which remained - you guessed it - paper money! But the Germans were seduced and reassured by this legerdemain. The inflation was over. One crisis had ended; the next was over a distant horizon.

Oddly enough, or understandably, perhaps, it was Schacht who came to mind when I was thinking about the present crisis of the euro zone, the crisis of Ireland, a seriously-ill patient to be kept alive by liberal transfusions of cash, including our cash, pounds as well as euros. We have to help a friend in need, we have been told, of course we do, though I wonder if our government is aware just how wasteful public sector expenditure is in the Republic, the pork barrel for a corrupt and clannish political elite. It's really quite something, it says a lot about Ireland's political class, when Gerry Adams rides in as a possible saviour.

But there are wider lessons to be taken from the Irish fiasco, lessons about the magic of money and the stupidity of politicians. The euro, that one size fits all currency, was based not on economic and political realities but on a bizarre dream, a dream that a strong economy like Germany could happily bed down with weak economies like Ireland and Greece. Piigs might fly, piigs did fly, but now they are falling one by one, the piigs of course being Portugal, Ireland, Italy, Greece and Spain.

The unemployment rate, high in Ireland, is ludicrously high in Spain, running somewhere at around 26%, a level that destroyed European democracies in the 1930s. But neither Spain nor Ireland can devalue; they are tied in to a monetary system that looks good in Berlin but dreadful in Madrid and Dublin. The warnings were always there, that buying into euroland involved the potential surrender of all fiscal flexibility, the ability to tailor one's financial policy to one's economic circumstances. Ah, but the piigs thought, the euro is riding high, it will never fall, we must ride high also. That, you see, is the magic of money. Or is it the witchcraft of money?

Not so long ago Ireland was being referred to in economic terms as a 'Celtic Tiger.' Well, now the tiger has been shot, skinned, and mounted on the wall of the German Chancellor, a woman who really knows about the magic of money, Europe's new Fuhererin. Ah, poor old Ireland, if only it had kept the punkt and not been seduced by the euro. There is no reason to suppose that the present crisis would still not have happened. It's the nature of capitalism to move through peaks and troughs, and those who tell you that it is possible to bring and end to 'boom and bust' are fools, or liars, or both. Under its old independent monetary system Ireland would still have been struggling, it may even have needed to ask for IMF loans, but it would have had the capacity to deflate, to let values and prices fall, thereby stimulating demand.

The insanity of the present position was wonderfully illustrated by Charles Moore (I'm his groupie in chief!) in this week's Spectator. As he says, it's possible to buy a decent hunter in this country for £6000. But in Ireland the same horse costs the euro equivalent of £7000. It simply makes no sense. Domestic demand in Ireland has grown much weaker over the past few years but the price for sterling buyers still remains artificially high. But this is the logic, the crazy logic, of euro land.

The single currency has benefited Germany, achieving a power over the outer fringes of Europe without the expense of sending in the Wehrmacht. The euro is operating in its magic a little like Schacht's Rentenmark, producing its own political logic. It might even be a jolly good idea to take the magic that one step forward and rename the currency the Euromark.

And there is Ireland, holding out the begging bowl, stuck in the economic and political margins, suffering a more complete humiliation than at any previous point in its recent history. Centuries of struggle against the English for this, a pot full of cash and eyes full of EU stars. What an irony it is to think that the country would be better off, as Moore suggests, if the Union Flag was still flying over Dublin Castle. Money is magic, yes, but it's also a curse. Or is the real curse the stupidity and the venality of politicians? How Schacht would have laughed.
Posted by Anastasia F-B at 16:08