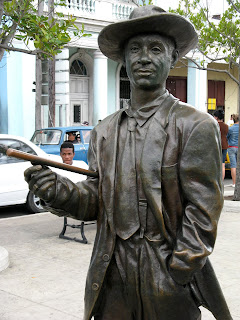 I’ve got exciting news for you if you are Cuban and a fancy-dress dancer. Your government has decided that you can work for yourself. That’s right, yours is among the 178 occupations that the Castro regime, in its limitless wisdom, has decided can be privatised. There is only one tiny drawback – you have to perform in the same style of costume as that of Benny Moré, the 1940s crooner. No, it’s not a joke: humour was first serious shortage ever created by communism,

I sincerely hope there are a lot of Benny Moré look-a-likes out there because, as I’ve mentioned before, Raul Castro, in an attempt to revive the moribund economy of a moribund state of a moribund revolution, is laying off 500,000 public sector workers. The private sector, such as it is, and it isn’t much at all, is expected to take this superfluous value. But in the unimaginative and bizarre world of orthodox communism the state has only been able to come up a fairly limited range of options, Benny Moré among them.

If you don’t have the required costume you can always become a clown or a button sewer, both of which made it on to the list. If you don’t fancy that you can try your hand at furniture repairs, just as long as you don’t try to make the stuff, and thus risk “accumulating property”; run the risk –Fidel forbid – of becoming a capitalist.

All these ideological dinosaurs are doing is simply legalising, if legalising is the word, a pre-existing informal economy rather than creating fresh opportunities. The caution is laughable, this fear of throwing out the baby with the bathwater when there was never a baby in the first place. Besides, the bath has a hole, so there is no water either.

Never mind that. Let’s be positive. All the Benny Moré guys will now be able to hire staff (does Benny Moré need staff?) beyond the immediate family. They will be able to have ‘employees’, in other words, one of those pre-revolutionary expressions long incarcerated in a verbal gulag.

When it comes to the Castro comedy people are understandably sceptical. Too many remember the previous liberalisation of the 1990s, when businesses thrived, only to be suffocated by red tape and exorbitant taxes after cheap Venezuelan oil started to flow in. People are now so used to things the way they are, used to the one step forward and three steps back approach, that many believe that things will never change for as long as the Castro Nepotism remains in power.

But they are wrong; things do change – for the worse, always for the worse. If you’ve been to Cuba I feel sure you will have heard the stories, the hard luck stories of people on the hustle. One acquaintance told me he had no choice but to work in the black economy because, in his words, he was paid shit by the government. Yes, they are paid ‘shit’, under $30.00 a month at the unofficial exchange rate, but at least there was guaranteed employment (never use one person when fifty will do), subsidised housing (dreadful places) and a basic food ration (go and stay if you can live on black beans and rice). Now that, too, is going there will be more beggars and hustlers than ever on the streets of Havana. No too many Benny Morés, though.
Posted by Anastasia F-B at 15:39